Asking For It by Louise O’Neill – Book Review #NOTAskingForIt

First Sunday post of my new schedule and I even had real post delivered today – on a Sunday! Uncle Vernon would be fumigating right now.

Today’s book created another unusual experience for me too – a proper book hangover. Often, after a finishing a book, I can just pick up another not long after  – but, not after this one. It hung around in my brain for a while and has been a tickle there ever since. Please note that this review discusses sexual violence against women so if you find that triggering please don’t read on.

This is my first book from Louise but it won’t be my last. Everyone was talking about Asking For It on twitter and saying how important a read it is. They aren’t wrong but, the fact that that’s true, is.

This is Emma’s story of that time she went to a party in a tiny dress, drank too much, took some drugs and woke up the next morning, in pain, on her front door step. Pictures emerge – online of course – that showed what happened last night and everyone, including Emma herself, is asking – was she Asking For It. You might even be asking the same question.

The book is written from Emma’s point of view and her view is heartbreaking, the responses everyone has to her are illuminated through her internal narration. The person whose initial response made me the most angry was her brother, he comes round, but I couldn’t understand why what he saw would make him think what he does. Some have criticised the ‘repetition’ in this book. I’d suggest that this reflects the type of mental ruminating that might happen after a traumatic event.

I’m not going to tell you the outcome but needless to say this will never be the type of story with a typical happy ending.

Asking For It will make you angry – at society and even at yourself. I knew what this book was about and even found myself almost repeating this question – in fact had the book not added the scenes that Emma doesn’t remember, it would have probably have been a very difficult case to prosecute. I remember seeing the film The Accused with Jodie Foster when I was a lot younger and this book echoes that. Who are the accused? Not the rapists but the girl who “let herself” get in a position to be raped. We really need to change the question from What did she do? To Why did they do it?

Please put yourself aside a few hours to read this in one go – once you’ve started it you won’t want to put it down…and even after you’ve literally put it to one side, figuratively it’s going to stay with you.

People ask why do we need feminism – because we call books like this important. Because the cover of the girl as a Barbie doll to be played with and posed is reflected on the cover of numerous magazines and in clubs and at parties across the world. I look forward to the day that the story in this book is seen as a relic of the past! How can we make that a reality?

I was inspired by Georgia Blackheart @GeorgiaReads review graphic. She said I could borrow the idea so I made some review tweaks to the cover below. 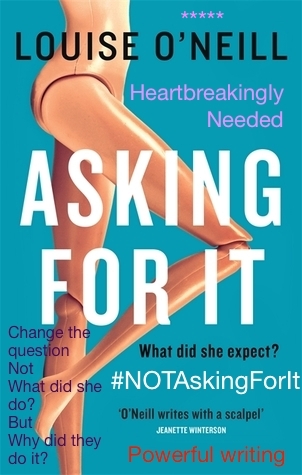