We Were Liars by E. Lockhart – Book Review – #LiarsLiveRead

I decided to storify my live reaction as I was reading as my review – enjoy. I have tried sooooo hard to lie and remain spoiler free. Looks like wordpress.com doesn’t let you fully embed so please click on the link to enjoy.

[View the story “#LiarsLiveRead” on Storify]

Today I am delighted to be taking part in the blog tour for Kim Curran’s Glaze which was released on Amazon on the 15th May. The blog tour has been organised by Faye at A Daydreamer’s Thoughts. Kim is also over at Uncorked Thoughts today. See below for the full list of stops.

There’s also a blog wide giveaway – here’s the rafflecopter entry. Prizes up for grabs include a limited edition hardback edition, chance to meet or skype with Kim, bookmarks and more. I think I might need to enter.

Petri Quinn is counting down the days till she turns 16 and can get on GLAZE – the ultimate social network that is bringing the whole world together into one global family. But when a peaceful government protest turns into a full-blown riot with Petri shouldering the blame, she’s handed a ban. Her life is over before it’s even started.

Desperate to be a part of the hooked-up society, Petri finds an underground hacker group and gets a black market chip fitted. But this chip has a problem: it has no filter and no off switch. Petri can see everything happening on GLAZE, all the time. Including things she was never meant to see.

As her life is plunged into danger, Petri is faced with a choice. Join GLAZE… or destroy it.

I have been lucky enough to be able to ask questions of three of Glaze’s characters: the book’s protagonist Petri, her close friend Kiara and the mysterious Ethan. I even snuck in a couple of questions for Kim, the author. I hope you enjoy.

Do you wish you had been called Petra?

*sighs* I wish I’d been called ANYTHING other than Petri. Zizi, that’s my Mum, thought naming me after the method of my conception was hilarious in the way that only she could. She also has this joke about getting ‘half-price on ginger sperm’ that she tells like fifty times a day.

Why the fascination with numbers?

I guess it’s because they make sense. They’re constant and comprehendible in a way humans never will be to me. Prime numbers. Patterns. I find them comforting. And sometimes, when everything feels like it’s too loud, I sit and recite Pi in my head till I calm down. Weird, I know!

What do you think of the idea ‘You’re better together’?

Zizi came up with that line, so, I was a little bored of it before the rest of the world heard it. But at first, I totally bought into it. I really believed that everyone would become their best, most brilliant self when part of something bigger than just them. I was always hearing about how all the great thinkers in the world only got to where they were because they were working with the ideas of others. How no one can really achieve something alone. But now… I’m not so sure. I guess it all comes down to what we mean by ‘better’. And who is the one making that decision.

What does family mean to you?

To me, it means belonging. Having a sense that you are safe and that no one is judging you for who you. They just love you – the way you are. It’s not something I’ve experienced all that much, to be honest.

What do you really think about kissing now?

Like anything. It’s about doing it with the right person. :oD

How did you feel when you were saved by a girl on the first day of school?

You mean when Petri stopped those guys from bullying me? I guess I could have handled the situation myself; I’ve been in my fair share of fights after all. But I thought it was really brave of her to step in. I mean, she didn’t even know me. She just knew that what they were going to do was wrong. It’s one of the reasons I like her so much. She’s this tiny thing with all this rage inside her. You do not want to be standing in the way when it explodes.

I like it. I like solitude and being able to think clearly. I spent a long time surrounded by other people and having all of my decisions decided by everyone else. So being invisible means I don’t have to worry about that anymore. It can be lonely too, for sure. But I’ll take that over noise. And it means I don’t have to worry about the government watching my every move.

Do you think Glaze contributed to your depression?

I don’t know for sure. The doctors tell me that it’s to do with an imbalance with the chemicals in my brain and so maybe I would have been depressed with Glaze or not. But I know it made me feel a whole lot worse about it. It was like everyone else in the world was having the best time of their lives while I was having the worst time in mine and I thought that there must be something so very wrong with me to not be able to join in with all that fun. So yeah, it made it worse.

What is it about the stars?

To me, they symbolise hope, they’re a point of light in the darkness. My dad used to take me outside to the garden at night and point out all the constellations. The bucket. The leaping frog. The laughing elephant. I didn’t know till I was older that he was making all the names up! So now, when I look up at the stars, I remember the stories he told to make his little girl happy. And that feels nice.

Why do you write?

There are a lot of writers who say they write because they can’t imagine not writing. I’m totally not one of those writers. I can absolutely imagine not writing. I can imagine myself running off and becoming a Mongolian Eagle Hunter and never writing another word. I can imagine myself becoming an astronaut and spending all my time watching the world rather than writing about it. But… that’s also exactly the reason I do write. Because I’m never going to run off and become a Mongolian Eagle Hunter or an astronaut. So I write to go on exciting adventures. I write to try and live other lives for a while. I write to entertain myself and work out what I think about things. I write because I love it. (I adore this answer although feel that Kim underplayed her skills of ‘premonition through writing’ – Google Glass and riots happened in real life shortly after she wrote Glaze!!! Spooky!)

You’ve turned to self publishing for Glaze so it must be important to you. Why write this book?

That’s a brilliant question. And yes, my decision to self publish rather than just let Glaze live in my bottom drawer was precisely because this book is so important to me. I wrote it to deal with a lot of confusion in my own head about trying to find myself amid the noise of other people’s opinions. I wrote it to try and understand how I feel about the world we’re living in today and where it’s taking us. I spend so much of my time online that I end up feeling really angry with myself for not getting out and living. So, I guess I wrote it to try and claim something back from that wasted time. And once I’d written it, I believed that other people might have the same worries as me. Which is why I wanted to share it with them. (I think there can be lots of  positives from online interactions but it’s definitely a challenge balancing time online with interacting with the real world. I think the book shows this really well).

Huge thanks to Kim (and Petri, Ethan and Kiara) for giving us a further insight into the world of Glaze. I really enjoyed this fast paced read. Interested to hear everyone’s views on the interview here today. 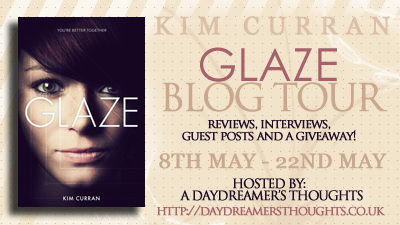 The Future is… Books! My Independent Bookshop

There’s a fun new website on the interwebs where you can create your own themed bookshop.

My Independent Bookshop allows you to create a mini bookshop of up to twelve books and you can link to your local independent bookshop (via Hive) so that when someone buys a book online based on your recommendation your local bricks and mortar bookshop benefits. I’ve chosen to link up with Gullivers Bookshop, a local family run bookshop that are supporting the HPA group I run with our Accio Books campaign.

Here’s the link to my Bookshop called The Future is… Books! which is celebrating my love of Dystopias/Science Fiction Futures.

Click on the books on the shelf and they open to reveal a mini review or suggestion of why I liked them. I’ve not added full reviews yet but I will. I’ve chosen seven books at the moment but have a few more on my reading list which I’m hoping to add. I’m only adding five star reads at the moment.

Here are a few other bookshops (by some twitter faves) that I’d recommend you take a look at: