Happy Halloween 👻 🎃 everyone – here’s a nice creepy piece of short fiction I wrote a while back. Hope you enjoy!!!

That’s what he saw first on his early morning jog over the dunes. Their feet.

At first he thought he might have interrupted something private, something that is usually and more comfortably best achieved indoors. Their feet were intertwined, touching toe to toe. On hers were two silver toe rings in twisted metal. He apologised then to their twisted faces. Eyes open they looked into each other’s eyes and saw forever and nowhere all at once.

He was not ashamed to scream as the crab scuttled over her hand. His dog lurched forward to lap at the dried blood that had once been dripping down from the gunshot between her eyes. The man was worse, his shot was through the mouth up into his brain. The congealed mess and sound of the dog’s lapping made him feel sick and he vomited.

Turned away from the scene he knelt in the sand no longer able to stand. He dialled 999 all the while trying to think of his response to ‘What’s your emergency?’ When the question came, he vomited again and spat out, ‘They’re both dead. Beach. Come quick.’

He spotted the gun then, in the man’s hand, and wondered if the girl had had a choice in this or if she had just been on her dream date watching a beautiful sunset with her lover.

When he heard the siren’s wail he wept and his dog, inquisitive and drawn to his sobs came close, nuzzled up and licked his tears.

Next Wednesday is the 1st November and the start of the month long challenge that is National Novel Writing Month, where writers everywhere act against logic and challenge themselves to write a minimum of 50,000 words of the first draft of a novel in one month. Yup. That’s a mind blowing 1,667 words a day.

I have successfully achieved this challenge twice and made it to 25,000 words on a third occasion and I’ve ‘failed’ many more times. BUT, this year I am going in with a slightly more plotted idea than usual, and a desire to write nearer to 80,000 words.

And I will be pushing through and editing the book afterwards. I recently attended Batnon and Robin’s Editing Masterclass, I have my magnetic silver board, and I will succeed. Whether anyone else will want to read my efforts is another matter but I am going to make sure that I create something I can class as a completed novel.

And then I’ll finally get round to editing the other 3 books I’ve partially written!!!

To keep myself accountable – every Wednesday I’m planning to do a check-in post telling you lovely people how much I’ve written.

Have you taken part in NaNoWriMo before or is this your first year? Have you got any tips for success? 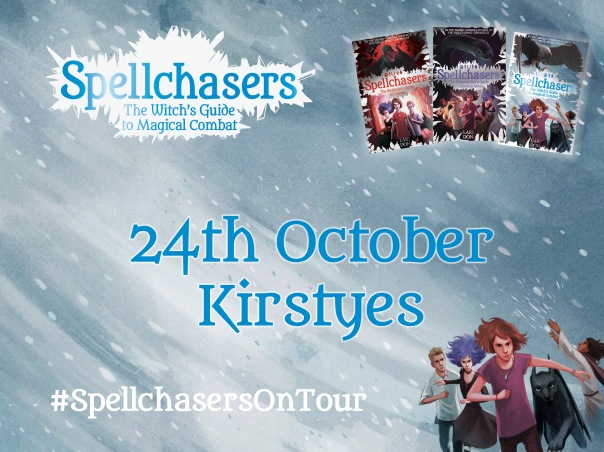 It’s my spot on Lari’s blog tour for her Spellchasers trilogy. Below I have her guest post where she shares her views on witches. First I’d like to outline the first book in the series and tell you what I thought.

Book 1 – The Beginner’s Guide to Curses

Molly is a human girl whose encounter with a nasty neighbour leaves her turning into a hare whenever a dog barks. She’s been cursed and she needs to learn how to break the curse before she ends up as a dog’s dinner. She’s thrust into a world of witches, dryads, kelpies, sphinxes and fairies.

Molly joins a group in a curse breaking class where they are set a number of tasks to help them learn how to break the dark magic holding them and, in some cases their families, captive.

The first part of the book is a great introduction to the world and by working with the others Molly’s eyes are gradually opened to what is around her. There’s a good mix of humour and action as well as developing friendships between the children in the class that are severely tested at times.

The tension really increased when the curse-hatched crows start trying to foil their plans and I found myself reading the last third of the book at super hare speed.

I really liked Molly’s character and her role as moral compass in the group. And just who is the Toad in their class?

Does the whole class gets the promised result of lifting curses? You’ll have to read to find out.

It reminded me a little of the old TV show Woof. I wonder which of my readers are old enough to remember that!

I have mixed feelings about witches. Particularly at this time of year (pointy hats, broomsticks, black capes and dropping chocolate eyeballs into plastic cauldrons…) I’m never entirely sure if I’m meant to find witches funny or fascinating, terrifying or tragic. Perhaps we love witches because they can be all of those things at once?

Ever since I was a child, I’ve been absorbing mixed messages about witches. For example the idea that witches could be good or bad probably came from reading L. Frank Baum’s Wizard of Oz. The idea that witches were just ordinary people – male or female – who were unjustly tortured and killed definitely came from studying and performing in Arthur Miller’s The Crucibleas a teenager.

Fairy-tale witches, like the ones met by Hansel and Gretel or Rapunzel, were clearly villains. But reading local Scottish folklore showed a more nuanced picture.

In those traditional tales, witches had a living to make, just like anyone else. You could buy a fair wind or a love potion from your local witch. If you annoyed a witch, your child or cow might fall sick, but the best solution was to buy a bit of help from the next witch along. So the old tales weren’t really about good or bad witches, they were about witches who happened to be on your side or not.

And witches weren’t all powerful beings, just folk with a bit of skill and knowledge. Though they had wonderful abilities too. In the lore of the North East of Scotland, I discovered witches who could shapeshift into animals, often into hares.

That vivid piece of witchlore inspired my most recent novels, the Spellchasers trilogy, about a girl called Molly who is cursed (by a male witch) to shapeshift into a hare at inconvenient times, and seeks help from a female witch who runs a curse-lifting workshop.

So Molly encounters different kinds of witches – malevolent and helpful, male and female – and she also encounters other magical beings who argue about the wisdom and ethics of dealing with ‘dark magic’ at all.

I write adventure books for 8-12 year olds, so there are chases, ambushes, monsters, and excitement. But in amongst all the shapeshifting and cliffhangers, I couldn’t forget the historical reality of those accused of being witches.

I had many of the initial ideas for Spellchasers while walking round my local park: Lochend Park in Leith. And it was by that loch that a woman called Bessie Dunlop claimed she once saw fairies. Bessie Dunlop was tried as a witch and burnt to death in 1576.

I couldn’t just ignore that history, and the history of hundreds of other women and men accused, tortured, tried and executed, when I was writing about fictional witches.

So Molly’s research into curses for the curse-lifting workshop uncovers the tale of a local woman being burnt alive as a witch. Molly is disturbed by what happened to that long-ago witch, and I hope the readers are too…

I’m inspired by old tales and lore about witches. I’m keen to explore ideas about witches in my fiction. I’m happy to have fun with classes of kids making up spells to put in my brass cauldron. But I am also, under it all, disturbed and distressed by the history of witch persecution.

So, here, have a chocolate eyeball for your plastic cauldron, but please don’t forget the dark history behind the stories…

Vivian French – The Bag of Bones (NOT Truda Hangnail)

Lari Don is a full-time children’s writer and storyteller. She grew up in the North East of Scotland and now lives in Edinburgh. She writes in her garden shed, helped by purring cats and hindered by lurking spiders. Lari has written more than 20 books, including adventure novels, picture books and retellings of traditional tales. She can be found on Twitter @LariDonWriter or at

The Spellchasers trilogy is available and out now.

Do check out the rest of the spots on the tour for more.