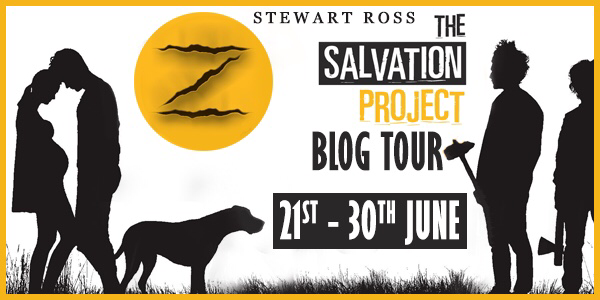 Back on release day I shared the synopsis of The Salvation Project here. 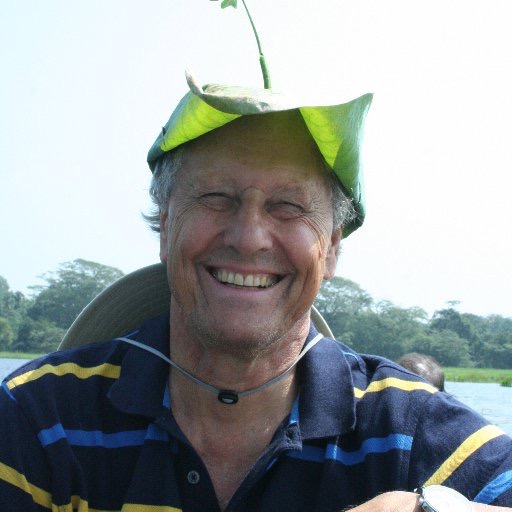 Stewart was born in Buckinghamshire and educated in Oxford, Berkhamsted, Exeter, Bristol, and Orlando, Florida. He taught at a variety of institutions in Sri Lanka, the Middle East, the USA, and Britain before becoming a full-time writer in 1989.

With over 300 published titles to his credit, he is now one of Britain’s most popular and versatile authors. His output includes prize-winning books for younger readers, novels, plays, three librettos, a musical, and many widely acclaimed works on history and sport. Several of his books are illustrated with his own photographs.

Stewart also lectures in France and the UK, gives talks, runs workshops, and visits schools. He is an occasional journalist and broadcaster. His brother, Charlie Ross, is the celebrated auctioneer.

In his spare time Stewart enjoys travel, restaurants, sport, theatre, photography, art and music. He lives near Canterbury with his wife Lucy, and – occasionally – his four children and two grandchildren. Each morning he commutes 10 metres to work in a large hut in the garden. 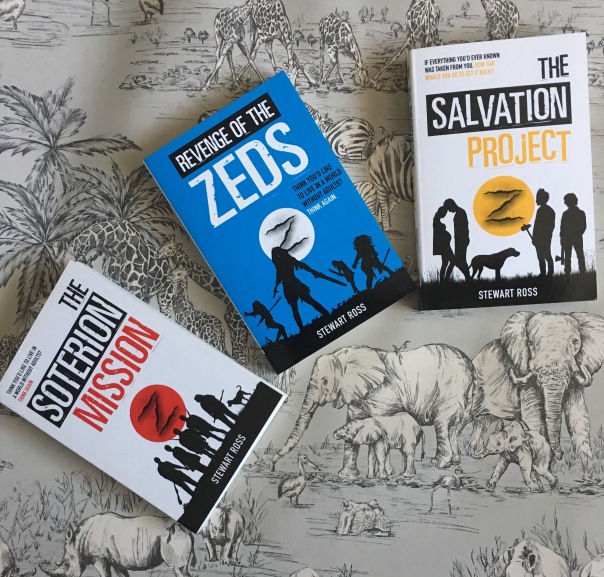 This is a high concept series whose central concept had me spooked. What if there was a virus that mutated DNA. So you cure the symptoms, think everything is okay and then suddenly human kind changes – they don’t survive beyond 19 years and age rapidly in their ‘Death Month’.
When reading the first book in the series which jumps around 120 years into the future I thought it read like a cross between Lord of the Flies, Mad Max and The Walking Dead (minus zombies). Think the Saviours versus Rick’s gang.
The Soterion of the title is a legendary store of knowledge. Books of the Long Dead. Roxanne is the only literate character having been taught to read through the three books that survive in her community – Peter Pan, a short biography of Cleopatra and The IKEA catalogue 😂😂😂. She joins up with Cyrus to find the Soterion and together they battle solar electricity worshipping Gova and blood thirsty Zeds.
There are lots of new terms introduced in the book and I felt a Glossary would have been helpful. And lo and behold or appears in the back of the second and third books. The use of some modern day vernacular such as cronies and bloke sounded strange in this new world.
I enjoyed the theme of exploring how we pass down history and knowledge and guide the next generation.
The book’s point of view is from an unnamed Omniscient narrator and I did find this a bit jarring because we jumped into so many characters minds. I’m less used to this POV nowadays and it was less noticeable in the second book.
Those readers who don’t like Instalove will be less enamoured with the romance aspect of the book. But I guess if you only survive to 19 you need to get in there quick.
It was interesting to read that this was initially published as a serial and I could see remnants of this in the way scenes ended with hooks. Although at times these meant that the reader was given an indication of what was to come perhaps a little earlier than I’d have liked.
If you like your dystopias fast paced and gory then you will enjoy the action scenes in this. Personally I felt the action was stronger than the dialogue and I could really see this as a graphic novel.

Book 2 – Revenge of the Zeds

Despite the two lead females in the first book women had a much more basic role in the first book. Mainly as breeders of the species.
Therefore I enjoyed the second book much more because we are introduced to a female led gang of Zed Warriors called the Kogon. There’s also a bit of diverse representation here with their leader Xsani both a lesbian and presented with a lisp. No impediment to her rise to power. The uneasy alliance between her and a character called Sakamir was fun to read.

The Soterion has been found in this book and that allows the theme of what books are for to come through. There were two quotes in particular that I highlighted.
‘All that reading’s not good for you. It gets you thinking too much, and that’s not healthy.’
‘Did books reflect the real world, like an image in a mirror? Or was the world around him a reflection of the ideas in books.’
The other themes that get a lot more exploration is the concept of ageing and death with conflicting opinions on whether The Salvation Project to find a cure to the mutation should be enacted.

Our reliance on technology in the present comes to the fore in this book where key to The Salvation Project lies in a laptop. With flat batteries, and no ready source of electricity – dare they head back to face the Gova. Is growing old worth it?
Check out the other stops on the blog tour to see how the series concludes. And head over to Goodreads to enter the giveaway – closes today.

From House Pride to Books with Pride

Soooo. Can you believe it. 20 years since the UK publication (or Book Birthday) of Harry Potter and the Philosopher’s Stone. Hands up who feels old? 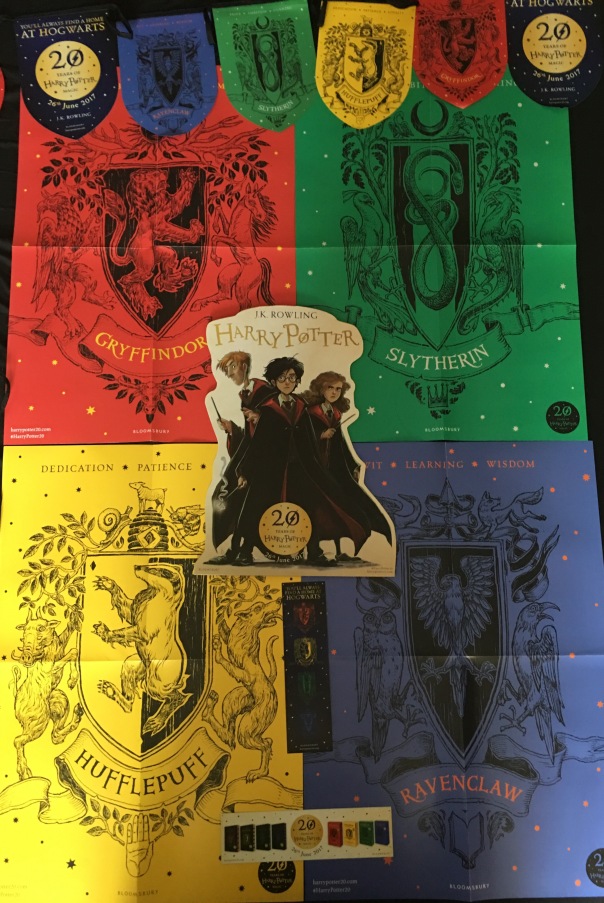 I’m still waiting for my House Pride Hufflepuff edition to arrive from Bloomsbury but here’s a lovely house 🌈 while I’m waiting.

In case you didn’t know June is also Pride month.

Being involved in the Harry Potter fandom, in particular attending events at LeakyCon and with The Harry Potter Alliance I have become much more aware of LGBTQIA+ issues.

One of my favourite Harry Potter memes is this one. 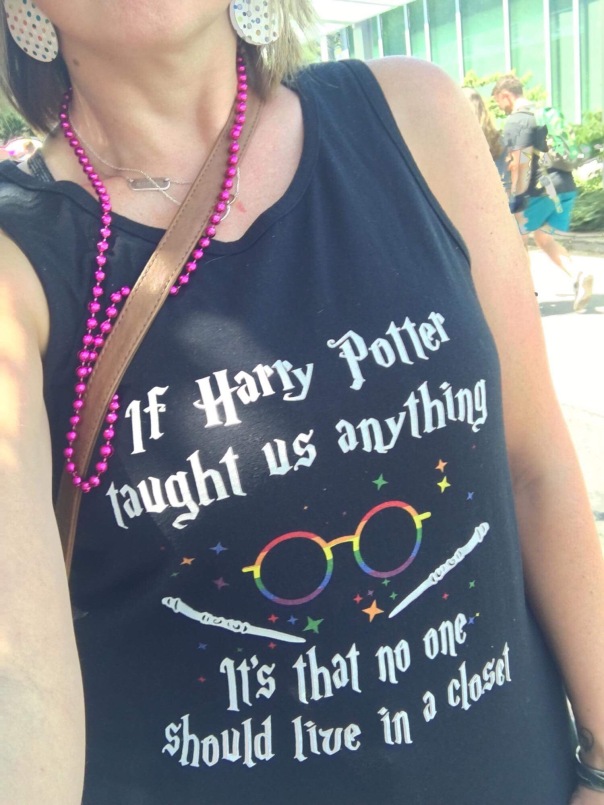 Image courtesy of @Run_Read_Repeat on Instagram. Thanks Emily. T-shirt by SunFrogShirts.

Now, we all know Dumbledore is gay but, importantly, this was never stated in the actual books. In fact there’s no explicit mention of LGBTQIA+ characters. Also Cursed Child fans were itching for a romantic entanglement between Albus and Scorpius but once again – denied.

There are though, thankfully, a growing number of excellent books with good representation and I was lucky enough to interview the author of a newest addition to the set. Noah Can’t Even by Simon James Green is a witty take on a teen boy exploring first relationships, along with his sexuality. Noah’s character gave me echoes of Holly Smale’s quintessential Geek Girl Harriet Manners and that is a very good thing.

Check out my interview with Simon on Waterstones Castlepoint’s YouTube channel and hear us discuss issues such as the need for Own Voices in literature.

Do read Noah Can’t Even too and let me How what you think.

I’m a Proud Hufflepuff and a Proud Ally. I hope I do a good job at living up to the values of both. 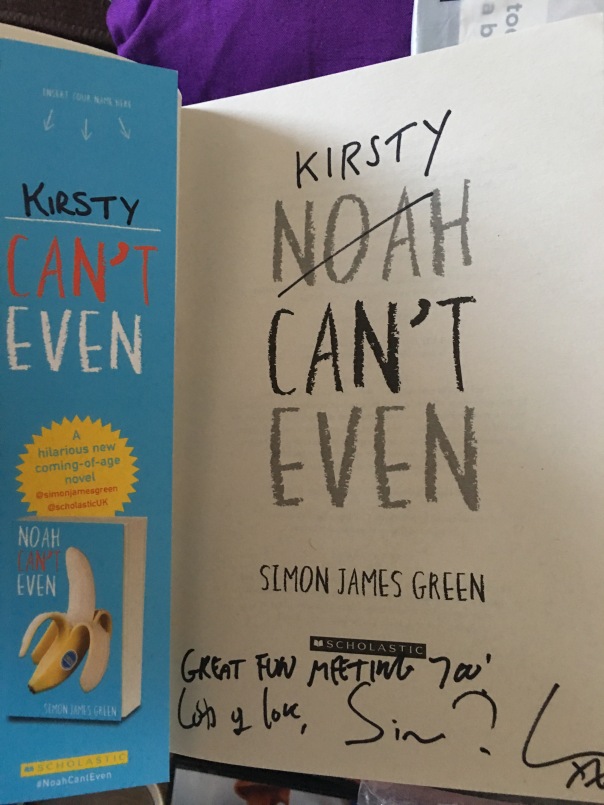 Happy Release Day to Stewart Ross. The Salvation Project is book 3 in The Soterion Mission series.

Humanity’s hope of salvation lies within a single laptop…

A mutation in human DNA means no one lives beyond nineteen. Scientists working to reverse this pandemic died before their Salvation Project was complete, leaving behind the results of their research in a sealed vault – the Soterion.

122 years have passed. The civilisation of the ‘Long Dead’ is almost forgotten, the Soterion has been burned to ashes, and communities of Constants are tormented by brutal tribes of Zeds. Cyrus, Miouda and Sammy flee their burning city with a laptop rescued from the inferno. They believe it contains the key to the Salvation Project. But its batteries are dead, there is no electricity to power it, and murderous Zeds will stop at nothing to get it back…

There’s a giveaway for the book that opens  on Goodreads tomorrow . Click here to enter. If you can’t wait you can buy on Amazon here.

The blog tour for the book kicks off on Wednesday. Come back to see what I thought on 30th June.