‘I can get a new brother? On the internet?’ Jonny muttered. ‘Oh sweet mangoes of heaven!’

Everyone has dreamed of being able to get rid of their brother or sister at one time or another – but for Jonny, the dream is about to become a reality with SiblingSwap.com! What could be better than someone awesome to replace Ted, Jonny’s obnoxious older brother.

But finding the perfect brother isn’t easy, as Jonny discovers when Sibling Swap sends him a line of increasingly bizarre replacements: first a merboy, then a brother raised by meerkats, and then the ghost of Henry the Eighth! What’s coming next?! Suddenly old Ted isn’t looking so bad. But can Jonny ever get him back?

Jo Simmons began her working life as a journalist. Her first fiction series for children, Pip Street, was inspired by her own kids’ love of funny fiction, and two Super Loud Sambooks followed. In addition to children’s fiction, she co-wrote a humorous parenting book, Can I Give Them Back Now?: The Aargh To Zzzzzz Of Parenting, published by Square Peg. Jo lives in Brighton with her husband, two boys and a scruffy formerly Romanian street dog. I Swapped My Brother on the Internet is her first book for Bloomsbury.

Nathan Reed has been a professional illustrator since graduating from Falmouth College of Arts in 2000. He has illustrated Christopher Edge’s How to Write Your Best Story Ever and the Elen Caldecott’s Marsh Road Mysteries Series. His most recent picture book is Samson the Mighty Flea by Angela McAllister. He was shortlisted for the Serco Prize for Illustration in 2014. When he’s not illustrating he can be found with his two boys and a football on Peckham Rye Common.

From the phrase Oh sweet mangoes of heaven, to this sentence in praise of naps, I knew I was going to love this fun and charming book.

Of course I love and adore my sister and never once wanted to swap her!!! Um… whilst that is true now when we were younger we fought so much that I’m sure both of us may have been tempted to try the service offered by Sibling Swap. Johnny and his brother Ted have just had a fight when he spots their advert and he fills out the form not really thinking about the consequences. What follows is a series of swaps with siblings that aren’t quite what he’d bargained for. I think my favourite was the ghost of Henry the Eighth and adults will love the little history nods in that section. And if you are a fan of 80s film Splash you’ll love Mervyn the Merboy.

Kids are going to love the silliness, burping, adventure but mostly… The Hanging Pants of Doom!!!

The story was naturally far fetched – especially the Mum’s reaction to her missing older son- but it made me smile a lot and comes to the inevitable realisation that perhaps our siblings aren’t altogether bad after all.

Definitely one to read out loud at bedtime with the whole family enjoying. (Note – parents may wish to study Meerkat noises before reading).

Now – which one is Fred and which is George again? 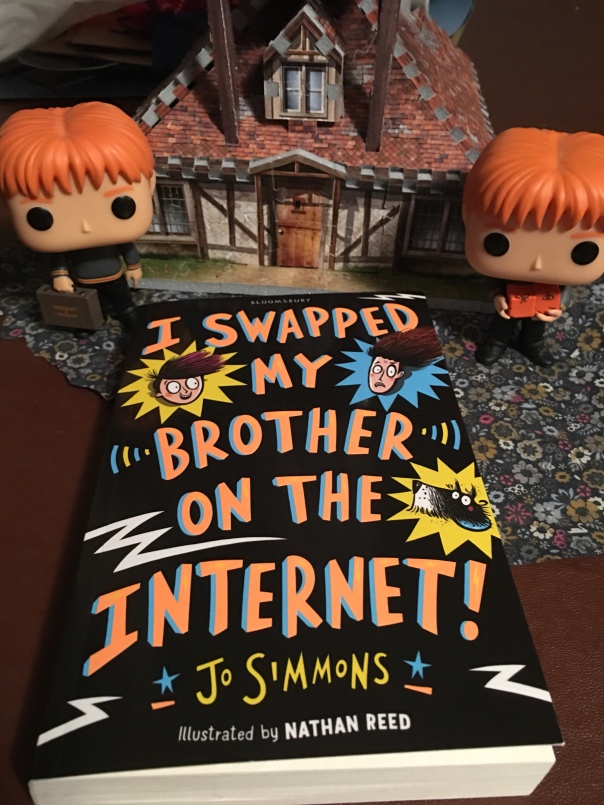 Thanks to Faye Rogers and Scholastic for the copy of the book for the purposes of this honest review.