Please follow my tumblr blog for more pictures – I’ll be posting them over the next few days.

The outer box is made from cardboard and has a drop down front. Each of the sides has images from the films at the top with details of the box content beneath, including the running time for each film on the back.

The box itself is a burgundy red with gold detailing – small stars edge the box top and bottom and around the lid.
The lid of box has a gold raised HP and golden snitch and  the front/back and sides have different image of the Hogwarts Crest. The one on the front is largest, a gold crest in a diamond outline with the H and house animals in black/dark brown, runic symbols surround it. Turning it to either side you will see a smaller gold crest, again with runic symbols. The back is the same as the front except for the hinge clasps. The bottom of the box is plain burgundy. 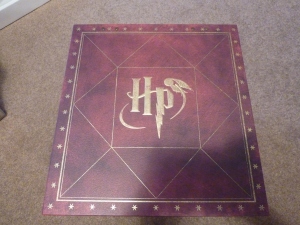 When you first open the box, underneath the lid is a diamond pattern with HP in the centre and a large diamond made from the house colours with the house animals outside of this. Top left is a Red Gryffindor Lion, top right a Green Slytherin Snake, Bottom Left the Yellow Hufflepuff Badger (my house) and bottom right the Blue Ravenclaw Raven.

xxxxx
The first DVD set of the Philosopher’s Stone is directly underneath the lid. Make sure to lift each black ‘velvet’ tray up (carefully they are quite thin and I did break one edge of one putting it back in 😦 ) for more creamy runic designs or in this case burgundy/gold. There is also a flap at the back which contains some extra goodies (a book and two maps).
Pull down the front and you find a multicoloured pattern of red, green, blue and yellow with the Hogwarts Crest with School Motto Below (Draco Dormiens Nunquam Titillandus – Never tickle a Sleeping Dragon – sound advice I feel). Surrounding this are Dragons in the school colours (Goblet of Fire?).

You’ll also see the three central drawers and their handles at the bottom and two block coloured areas with a central star.
Pull out the left side and the top block transforms into another drawer which contains Films 2 and 3. It also reveals a multicoloured draw with gold star. Don’t be an idiot like me and try and claw these open – push in and they click open, the reverse closes it. Pulling out the left side moves the second block into a drawer containing films 4, 5 and 6. To the top and bottom of both sides you see the multicoloured pattern on the walls.
Right at the back in the centre is the multicoloured patten again but this time reach in and locate a little ribbon tab and you will find the bonus blu-ray disc in a green cardboard packet (with an eye on the front). It is secured in a small tray by a burgundy ribbon.

The top patterned push to open box contains a browny rolled scroll with black ribbon and the lower one contains a piece of black foam and a black box with Harry Potter Wizard’s Collection written on it. The top central drawer contains a book and envelope, the middle drawer contains films 7.1 and 7.2 and the bottom drawer has concept drawings, a WB Studio Tour leaflet and your Certificate of Authenticity. More on the detail of these in future posts.

Posted on September 12, 2012, in Kirsty rambles on about life, the universe, tv, and everything!, Reviews and tagged Harry Potter, The Wizard's Collection. Bookmark the permalink. Leave a comment.