WHEN THE UNIVERSE NEEDS SAVING

THERE’S ONLY ONE GIRL FOR THE JOB

Most know Androma as a powerful mercenary whose reign of terror stretches across the Mirabel Galaxy. To those aboard her glass starship, Maurauder, however, she’s just Andi, their friend and fearless leader.

But when a routine mission goes awry, the Maurauder’s all-girl crew is tested as they find themselves in a treacherous situation- and at the mercy of a sadistic bounty hunter from Andi’s past.

As the Maurauder hurtles towards the unknown, and Mirabel hangs in the balance, the only certainty is that in a galaxy run on lies and illusion, no one can be trusted.

Zenith is book one of The Androma Saga and it has definitely whet my appetite to keep reading.

I am not familiar with either author’s other work in terms of either writing or YouTube so it was nice to come to this fresh with no real preconceptions.

What I did find was a book that seemed to be influenced by a lot of other YA and pop culture I’ve loved. The prison break aspect of Six of Crows, a pinch of Divergent, a Ship of Firefly roguishness, even a Handmaid’s tale feel, and a Potter reminiscent team nickname.

The book starts with a Prologue and then continues with chapters each headed up from a different character’s point of view. The characters we hear from are the main series protagonist Androma (Andi aka The Bloody Baroness), Klaren (a historical character), Dex (the Bounty Hunter from the synopsis and Andi’s ex), Lira (Andi’s crewmate and best friend), Nor (The Queen of a planet that holds a tentative peace with the rest of the galaxy) and Valen (the mission!).

Here comes my first issue with the book. I was fine with the amount of POV characters given the scale of the story and would have even liked to hear from the other two crew mates. However the book breaks its own rules. It sets up each chapter clearly with whose point of view it’s meant to be from and for some reason in a couple of Dex’s chapters we get a switch to Andi’s point of view that is entirely unnecessary and does momentarily take you out of the story.

The other issues I had were that there was frequent repetition of concepts and thoughts such as Valen’s thirst for vengeance and Andi’s guilt over an event that occurred in the past. Whilst it is true that the more we returned to these thoughts the more the ideas and action behind them became clearer, and it is true that people do become fixated on issues, I think a few incidences could have been edited out. And there was definitely no need to keep stating the colour of Andi’s hair so frequently. White blond with purple – which to be fair does sounds like a pretty cool look. There was also a few clunky phrases such as ‘downing half a bottle in one sip’.

But, equally there was some great use of phrasing including the particularly disgusting reference to ‘palm juice’ which made me feel quite queasy but that really worked in context.

Above all I loved the Maurauders. The relationship between the all-girl crew of Andi, Lira, Gilly and Breck was what I enjoyed most about the book. Gilly is such a firecracker and so young that I was drawn to her story in particular and would love to hear from her point of view in future books. I also thought the blend of femininity and violence within them worked well and that, although the girls were total badasses, they could also get very excited about pretty dresses. The relationships between all of the characters was what drove the plot and what made the issues I had with the book easy to overcome.

I’ve seen reviews saying that the worldbuilding was sloppy but personally I thought this was another strength and I loved the inclusion of the historical perspective from the distant past as well as Andi’s more recent past and the idea that all the characters are running away from things we know they are going to need to face. The whole world history and individual character experience also pull together in a dramatic conclusion. The Zenith of the title takes a while to materialise but when it does you feel its impact.

This book is a great mash up story – a space opera – with such scope for character development. I had a few issues with the editing but the plot is clever, the characters complex and it’s really a lot of fun. I’d love to see it filmed, it’s very cinematic and would make a great tv series. Now can someone tell me when book two is due out? 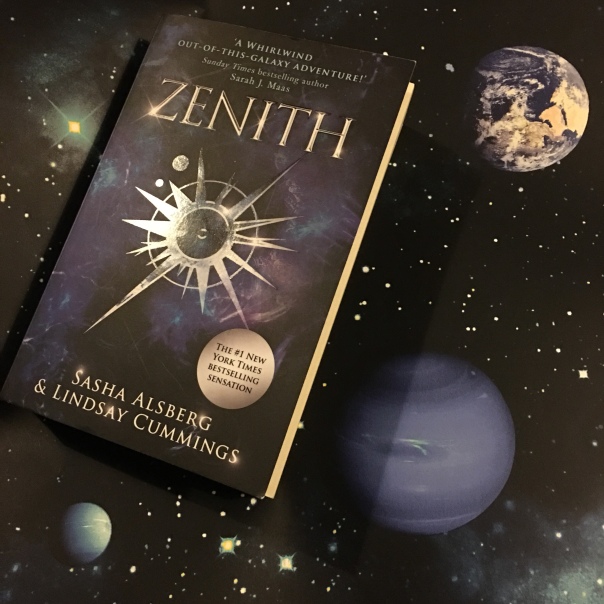 Thanks to HQ for the finished copy for the purposes of this review. Opinions are as ever my own.