Cosplay ready, Violet and her friends are at Comic-Con. They can’t wait to meet the fandom of mega-movie, The Gallows Dance.

What they are not expecting is to be catapulted by a freak accident into their favourite world – for real. Fuelled by love, guilt and fear, can the friends put the plot back on track and get out? The fate of the story is in their hands…

How The Fandom Came to Be

I received a proof copy of The Fandom at YALC (the Young Adult Literature Convention) in July 2017. YALC is part of LFCC (London Film and Comic Con) at the Kensington Olympia. The very Comic Convention Violet and her friends are attending in their The Gallows Dance Cosplay.

When I was younger my sister and two male friends of ours used to play this game where we’d ‘get sucked into different TV channels’ and act out a show from that channel. I was also a fan of the old cartoon Dungeons and Dragons… and who hasn’t wanted Hogwarts to be real? So the idea of getting drawn into your favourite work of fiction clearly holds some appeal to me.

Violet, her brother Nate, and her friends Alice (The Gallows Dance fan fiction writer) and Katie (who hasn’t even read Twilight!), find themselves walking into a photo shoot and ending up in a shoot out. The stakes for our foursome are high. From the prologue to the film outline given in the first chapter we know that despite the romance that draws the group into this Fandom the danger is going to be very real.

Violet is a normal girl, she faints – she’s only been on one date that didn’t end well and now she has to play the heroine, the love interest on whose head the fate of an entire society rests. It’s a good thing she has an expert knowledge of the story canon. Except knowing the words isn’t always enough, especially when it’s not clear who’s good and who’s bad, you start to fall for the wrong guy and it really looks like going home is an impossible dream. Violet is a really likeable character and all the way throughout you can see she wants to do the right thing.

One of the characters Baba asks her ‘If you were stuck here… What kind of an Imp would you become?’ Violet has to decide if she is in a romance or something more?

The Gallows Dance is a sci-fi dystopia where humans have been genetically modified as ‘Gems’ and normal imperfect humans are Imps. There’s a Romeo and Juliet type plot, brooding boys Thorn, Ash and Willow, rebels who want an uprising, and nods to The Wizard of Oz, Divergent and The Hunger Games.

As well as the romance the sibling relationship is portrayed well, and even though they are absent the calming presence of Violet’s parents is felt which is somewhat unusual for YA. Female friendships are explored in their complexity and limelight-stealing Alice and compound-swearing Katie remind us that we are dealing with a group of contemporary teenagers.

The story quite quickly goes off script and the group find themselves on a packed adventure with limited time to take the correct path. I found this a really fun read and an excellent homage to my favourite genre.

Don’t forget to check out the rest of the stops on the tour and do pick up a copy of The Fandom which is out this week. 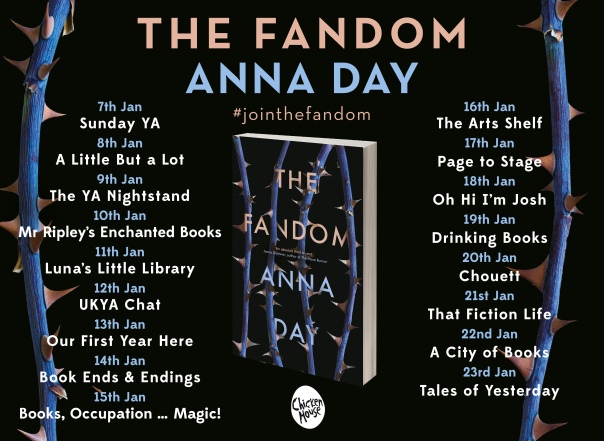 Which fandom world would you definitely not want to venture into?