Letters to Eloise – The story behind Abelard and Heloise

Letters to Eloise is the heart-wrenching debut epistolary novel by Emily Williams; a love story of misunderstandings, loss, and betrayal but ultimately the incredible bond between mother and child.

Author Emily and her family

Thank you so much for welcoming me onto your blog for my guest post. Today I am going to talk more about the story behind the quotes from ‘Abelard and Heloise’ that are woven through my debut novel Letters to Eloise. I don’t want to give away any plot spoilers so I will leave these out and hopefully tantalise you with a snippet of the story so you’ll want to find out more! Letters to Eloise is my debut love story that was published by Lutino Publications last month.

‘Receiving a hand written letter is something that always puts a smile on my face, no matter who the sender is.’ Flora Tierney.
When post-graduate student Flora falls unexpectedly pregnant during her final year studies she hits a huge predicament; continue a recent affair with her handsome but mysterious lecturer who dazzles her with love letters taken from the ancient tale of ‘Abelard and Heloise’, or chase after the past with her estranged first love?
But will either man be there to support her during the turmoil ahead?

‘Banish me, therefore, for ever from your heart’ – Abelard to Heloise.

The story behind the name Eloise …

When I first started writing Letters to Eloise, I had planned the overview of the plot, and then was in the process of deciding the names of the characters. I have always loved the name ‘Eloise’ and looked it up in a babies name book to find out more. I researched each name in the novel this way to try to fit the names meaning with the characteristics of the character. The meaning of the name Eloise is ‘famous warrior’ and the name is linked with the Germanic name derived from ‘hail’, which means robust and healthy. The name fitted this character perfectly.

Love is incapable of being concealed; a word, a look, nay silence speaks it all. Abelard to Heloise

I read about how the name became famous due to the tragic love letters between Heloise d’Argenteuil and her tutor Peter Abelard. This lead to my further research into the love story of Abelard and Heloise, and the tragedy of their relationship. I became interested in this true story and bought a book of their letters to read. The website ‘Sacred Texts’ had translations of their letters to each other and this source was invaluable in my research. I would recommend a read. I had never even heard about the ancient tale before, and found myself fascinated.

The relationship was a scandal at the time, due partly to Heloise’s age and Peter Abelard’s position. Tragedy followed their illicit relationship as other people fought to keep them apart. However, by writing letters — for over twenty years — their love continued to burn for each other despite the tragic circumstances. The story is an inspiration, as is their courage and passion, which kept their love alive despite the separation between them. The quotes from their letters to each other fitted parts of the storyline of Letters to Eloise perfectly, so I interwove them into Flora’s letters to her unborn child.

Heloise and Abelard is a passionate, true love story and I knew the name Eloise was a perfect fit.

God knows I never sought anything in you except yourself. I wanted simply you, nothing of yours. Heloise to Abelard. 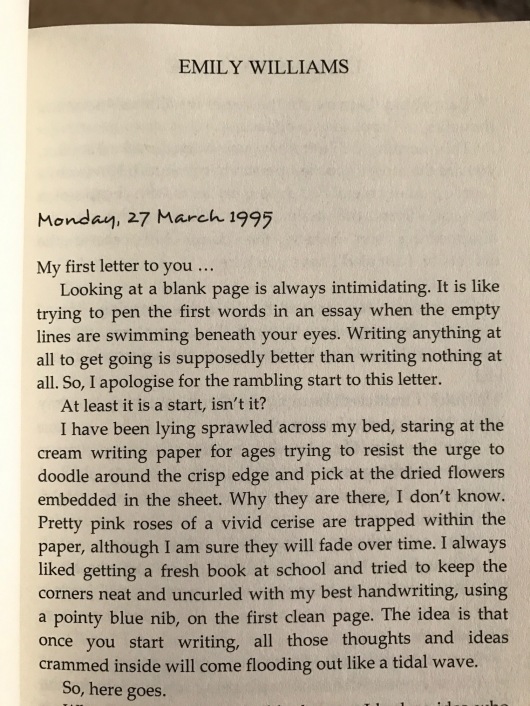 Read Letters to Eloise, which is out now on kindle and in paperback, to find out more about the story of Abelard and Heloise and to follow Flora’s story and her own predicament.

Emily has also been kind enough to share some editing tips so pop back on Wednesday to find out more.

X is for… X doesn’t mark the spot #AtoZChallenge

X is for… X doesn’t mark the spot

Completing qualitative research isn’t a search for a universal truth but a contextual one.
It also isn’t a simple case of turning the page and finding the answer staring back at you.

It’s more like an x-ray – which needs reading and interpreting.

Or even exploring a treasure map with a number of ‘x’s to mark many spots.

It is the qualitative researcher’s responsibility to document full, rich description to allow the consumer of research to analyse similarities to and differences from their own context and make appropriate judgements based on clinical reasoning.

So, to link up with my other X post for today my catchphrase won’t be the X-Files ‘The Truth is Out There’ but rather ‘The Truth is in You’.

What do you think about the exploration for truth?