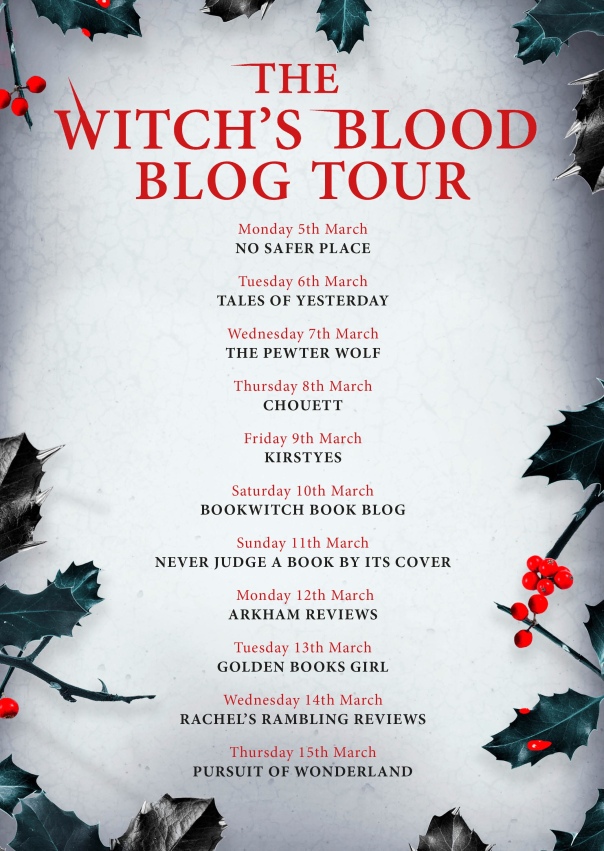 I’m so pleased to be welcoming sisters Katharine and Elizabeth Corr to Books, Occupation… Magic! today to help them celebrate the publication of the final book in The Witch’s Kiss trilogy. The Witch’s Blood. 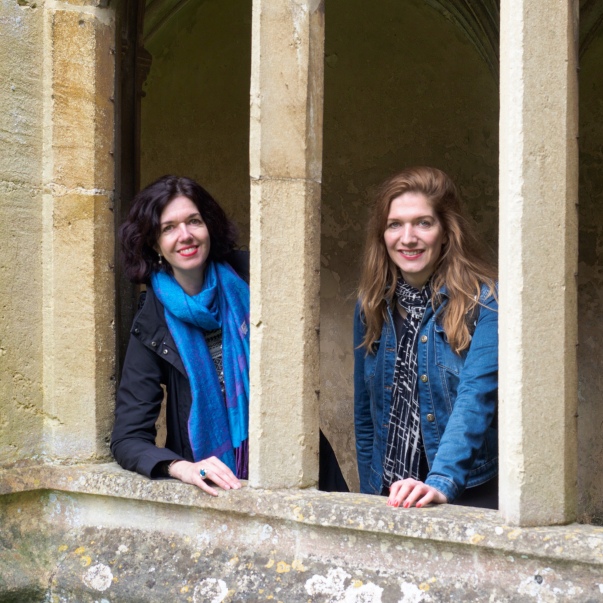 As one door closes… Thoughts on finishing a series

We started writing the book that became The Witch’s Kiss back in the early summer of 2014. It wasn’t our first book, but it turned out to be the one that changed our lives: it got us an agent and then a publishing deal with HarperCollins during the course of 2015. Since then, it’s been a bit of a whirlwind. In the two and a half years since we started working with HarperCollins we’ve written and/or edited three books and seen them published. We’ve collaborated with three different editors and have seen our characters grow and survive (mostly!) everything that we’ve thrown at them. And now…

And now that particular bit of our writing journey is over. We dotted the last ‘i’ and crossed the last ‘t’ of The Witch’s Blood, the final book in our trilogy, back in November. Now the finished product, in all it’s beautiful, blood-and-holly glory, is in the shops. We don’t have to think about Merry and Leo, about witches and curses, anymore. And that makes us feel…

Weird, to be honest.

On the one hand, it’s nice to be able to take our feet off the accelerator a little (yes, you have to imagine us both trying to drive a car at the same time – it’s kind of how we write our books). Finishing three books in two and a half years has kept us pretty busy. But now, we’ve got time to think about what we’d like to write next. Time to start working on our new projects (four, at the last count). Time to invent new places, make friends with new characters, and decide what horrible things we’re going to inflict on them. And yet…

And yet, we’re a little bit sad. The more we’ve explored the world of The Witch’s Kiss, the more that world has revealed itself to us; there’s always just the hint of something over the horizon, of another room glimpsed through a half-open doorway. Both of us would like to spend more time with Leo and Cormac, for example. Or maybe find out what it was like for Gran to grow up in a magical family in wartime England. Lots of possibilities. But still only twenty-four hours in a day.

So, for the time being, at least, we’re shutting the door on The Witch’s Kiss and moving on to new endeavours. But we’re not throwing away the key: just tucking it under the doormat so it’s easily accessible. Because you never know. 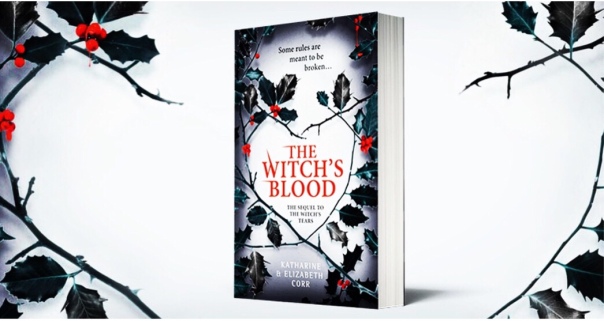 Thanks to Kirsty for being part of our blog tour!

I’ve recently re-read the first two books and loved them even more. I always find I spot new things on a re-read.

Flashback to my interview with the sisters and their characters on the release of The Witch’s Kiss – https://kirstyes.co.uk/2016/07/04/the-witchs-kiss-blog-tour-author-and-character-interview/

And I was so happy to be invited to the launch of The Witch’s Tears that I made a little present for them both. Looking forward to seeing what’s gone in the last frame. Some Black Holly perhaps? 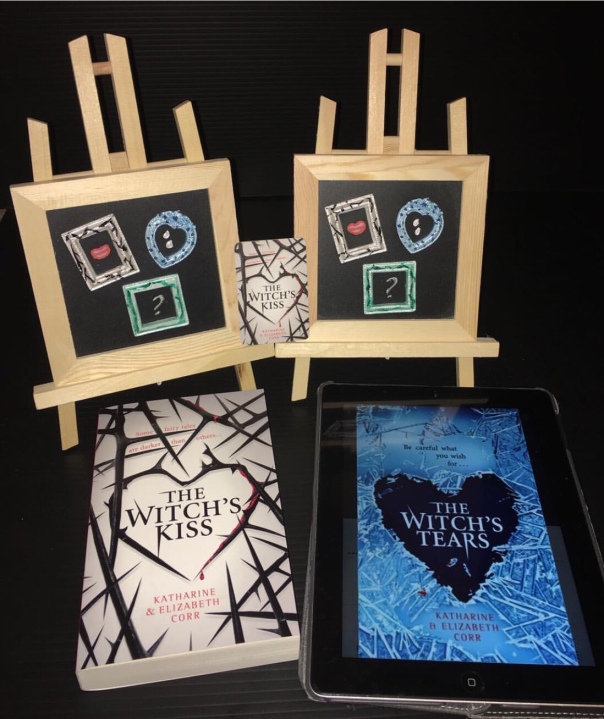 Finally a nod has to go to Lisa Brewster of Blacksheep Design for the stunning covers. 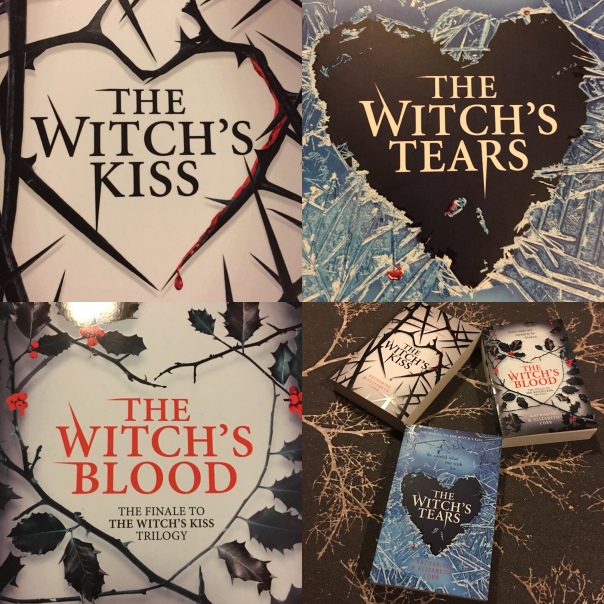 And I did shed a little, happy, tear when I read the acknowledgments in The Witch’s Blood. Thanks guys. Now I have a day off work so I’m going to tuck up in bed and read the whole of The Witch’s Blood. Will share my review shortly. I’m not sure I’m ready to say goodbye to Merry, Leo and the gang either. 😢 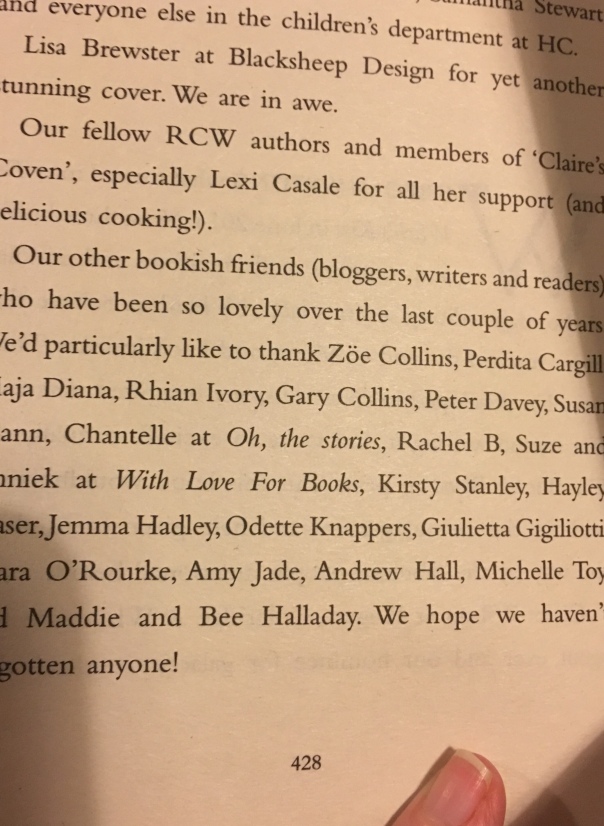 The Witch’s Kiss is the first book by writing duo sisters Elizabeth and Katharine Corr. (Freakily or not my middle name is Elizabeth and my sister is Catherine!).

Today we can see how in sync they are by checking out their responses to the same questions.

Which one of you became interested in writing first?

Liz: We both loved writing from an early age. Kate used to write poetry (some of it was alright) whilst I used to write for Star Trek fan fiction (way back in the days before fan fiction was actually a thing…)

Kate: I probably started writing first because I’m older, but I do remember Liz writing some pretty funny stuff as a teenager. I seemed quite drawn to very angsty poetry.

What was your biggest disagreement when writing the book?

Liz: Katharine always wants to kill someone. I generally like our characters and want them to live out their natural lives as best as they can. Kate, on the other hand, often wants to do exceedingly mean, dark things to them. Sometimes she makes me cry with her darkness.

Kate: I’m pretty sure I suggested killing off Leo, Merry’s brother, at some point; we ended up having quite a lengthy “discussion” about that. Voices were raised. There may have been some un-sisterly language…

Describe your sister in five words

What word/s does your sister overuse in their writing?

Kate: It’s her punctuation. Too many exclamation marks, not enough commas. *Grits teeth. Gets out red pen.*

Sixteeen-year-old Meredith is fed-up with her feuding family and feeling invisible at school – not to mention the witch magic that shoots out of her fingernails when she’s stressed. Then sweet, sensitive Jack comes into her life and she falls for him hard. The only problem is that he is periodically possessed by a destructive centuries-old curse. Meredith has lost her heart, but will she also lose her life? Or in true fairytale tradition, can true love’s kiss save the day?

Where did you see your life going after school?

Until recently, I didn’t see my life going anywhere. There was just a void. Nothing. I’d done some bad stuff, and I couldn’t get past it. But now… things are getting better. I’m becoming more used to my power, starting to get comfortable with it. But as to the future… It’s difficult to say. After everything I’ve been though recently, I’m trying to take it a day at a time. I’m just glad to still be here.

What does magic feel like?  Tell us about the good and the bad.

Magic is – or can be – empowering. Liberating. When a spell goes well, I feel pretty unstoppable. And the power – it’s like a kind of…liquid fire, snaking through my veins and lighting me up. But that’s also the problem. It’s addictive. The more you use it, the more you want to use it. And if you’re not really careful, if you don’t have utter certainty about what you’re doing, and why you’re doing it… Things can go bad, really quickly. I’ve found that out the hard way.

Do you wish you were able to do magic?

No, not really. I’ve seen Merry do some pretty amazing stuff. But I’ve also seen her on days when it’s all gone wrong. Days when the magic has been almost been controlling her, not the other way around. Sure, using a spell can sometimes be a quick fix, make life easier. But looking at Merry, and the other witches in my family… it definitely comes at a price. At the end of the day, I’m happy being ordinary. Merry once said I was her glamorous side-kick, but I’d rather think of myself as her solid second-in-command instead. Besides, she’s got zero common sense.

What does love mean to you?

Love? It means everything to me. Love is what Gwydion was trying to destroy. He thought love was a weakness – a lie – but love saved me in the end. When I first found out I was the son of a king, my thoughts were not of the kingdom, or the riches and wealth I was about to inherit. Instead all I could think about was my family – about the mother and father who raised me as their own, whom I was about to leave behind. So, I suppose that, for me, love is about family. But it’s also about kindness, and sacrifice. True love means truly putting another first. Despite the curse, I have been lucky, in a way: I have had people in my life willing to do that for me.

If you could describe your best friend Merry in 5 words what would they be?

Only 5? Oh, that’s hard. I guess…well, athletic, obviously. Fearless. Over-achieving. Secretive, especially recently. And, you know, just a little bit weird. But in a good way.

I do love a good witchy story and this one was a good mix of urban fantasy and historical fantasy – with the past and present worlds colliding. I got hints of Maleficent (the cursing) and Practical Magic (especially when the coven came out in force). Merry is a somewhat reluctant heroine – and I don’t blame her – poor thing hasn’t had half the training she needed thanks to some ‘family dynamics’. One set of family dynamics that really works to help her is with her and her brother Leo – I really liked him as a character and I’m sure she was thankful for his protective instincts on a few occasions.

The historical scenes showed the long line of witches that Merry descends from – and they are as cursed as Jack. I had echos of Melinda Salisbury’s The Sleeping Prince when reading these sections.

I’m not going to tell you what happens except to say it ends with the mention of the sequel – The Witch’s Tears. This can be read as a stand alone but I’m sure, like me, you’ll want to know where the story goes from here.

Huge thanks to the sisters for answering my questions (and demonstrating typical sisterly love) and to Vicki Berwick for the ARC (my opinions are my own – as ever).

Do check out the rest of the stops on the blog tour – The Witch’s Kiss is available to buy now.