Midsummer’s Eve, 1648, and England is in the grip of civil war between renegade King and rebellious Parliament. The struggle reaches every corner of the kingdom, even to the remote Tidelands – the marshy landscape of the south coast.

Alinor, a descendant of wise women, crushed by poverty and superstition, waits in the graveyard under the full moon for a ghost who will declare her free from her abusive husband. Instead she meets James, a young man on the run, and shows him the secret ways across the treacherous marsh, not knowing that she is leading disaster into the heart of her life.

Suspected of possessing dark secrets in superstitious times, Alinor’s ambition and determination mark her out from her neighbours. This is the time of witch-mania, and Alinor, a woman without a husband, skilled with herbs, suddenly enriched, arouses envy in her rivals and fear among the villagers, who are ready to take lethal action into their own hands.

Philippa Gregory is the author of many bestselling novels, including The Other Boleyn Girl, and is a recognised authority on women’s history.

Her Cousins’ War novels, reaching their dramatic conclusion with The King’s Curse, were the basis for the highly successful BBC series, The White Queen.

Philippa graduated from the University of Sussex and holds a PhD and Alumna of the Year 2009 at Edinburgh University. In 2016, she received the Harrogate Festival Award for Outstanding Contribution to Historical Fiction. Philippa lives with her family on a small farm in Yorkshire and welcomes visitors to her website, PhilippaGregory.com.

I don’t read a lot of historical fiction but even I am familiar with Philippa Gregory, despite never having read her work before. The Tidelands is a new series, set during a period where life could be dangerous for women who were walking a fine line between healing and what could be seen as witchcraft. Having recently read and enjoyed The Familiars by Stacey Halls I thought this would be a great introduction.

With echoes of Great Expectations the Tidelands of the title are very much a character in their own right. Foreboding and isolating, the arrival of a newcomer brings with it the intrusion of the outside world where King Charles is at war with Parliament.

A slow burning romance allows us time to get to know our main characters. Alinor, her daughter Alys and son Rob and James, the outsider, who rocks his world and theirs.

Phillippa is a master at the everyday, at representing what it might have been like to live during that time. My nearest comparison, not having read much of this genre is Catherine Cookson’s The Dwelling Place. Another book I enjoyed. Tidelands is a book with a character driven plot and historically accurate peril; the threat of being labelled a witch lingers throughout the book. I enjoyed the slower pace and the focus on women’s stories. I’ll definitely be continuing with the series and checking out some of her earlier work.

Thanks to @darkroomtours and @simonschusteruk for the #gifted copy for the purposes of this honest review. #Tidelands #DarkroomTours #PhilippaGregory #historicalfiction #witchcraft #bookstagram 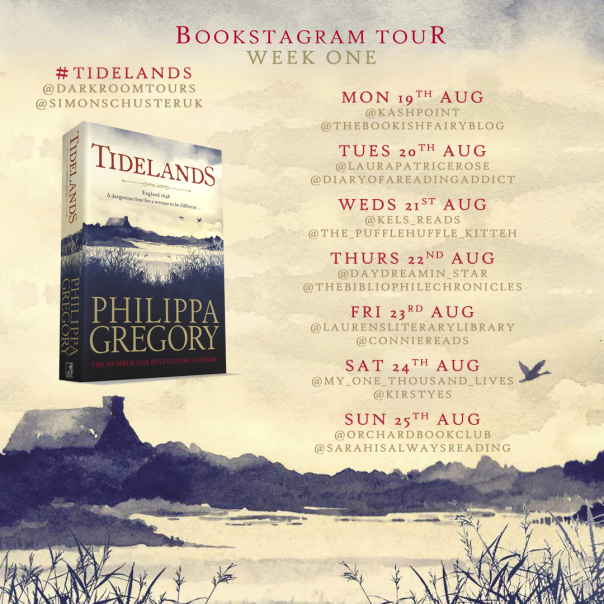