Who Let the Gods Out? By Maz Evans – Book Series Review 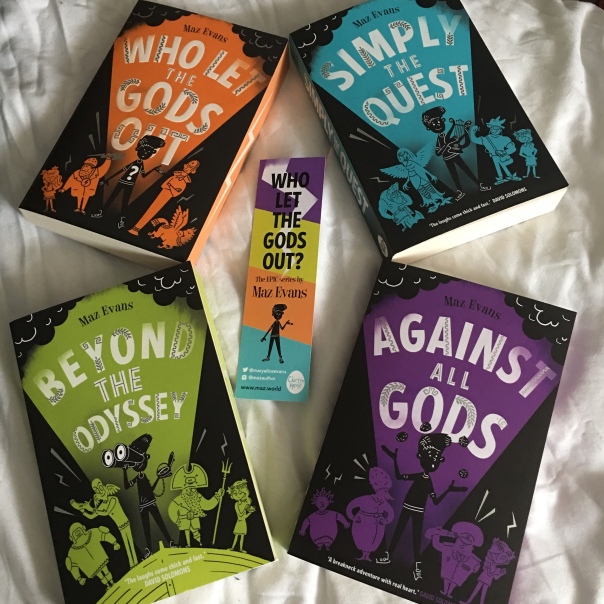 The fourth and final book in the Who Let the Gods Out? series was recently released and I’ve whipped through all four books this week.

When Elliot wished upon a star, he didn’t expect a constellation to crash into his dungheap.

They need the King of the Gods and his noble steed. They get a chubby Zeus and his high horse Pegasus.

Each book sees a quest to find one of the four Chaos Stones. Will Elliot get them and everything else he wants?

Elliot – 12 year old Elliot is our protagonist and he is a boy who, like Atlas, has the world on his shoulders. Kind, considerate and conflicted.

Virgo – 1,000ish year old Constellation in the body of a young girl sneaks down to earth trying to do an optimal job but discovers that maybe she’s not always right.

Josie – Elliot’s mum. Josie Hooper is a single mother by circumstance, but she’s not well. Clearly experiencing an early onset dementia she cares for Elliot deeply and he for her. His love for Josie drives the whole story.

Zeus – King of the Gods. Flirt, womaniser but really a softie with a good heart of not the most strategic mind.

Thanatos – Our big bad. Daemon of death. Finally released from his imprisonment in Stonehenge he is now after the Chaos Stones to take over the mortal world, and get rid of most of the mortals.

Patricia Porshley-Plum – The real big bad. Umbridge’s posher sister. Mortal. Wants to buy Home Farm Elliot and Jodie’s home, and she doesn’t really mind what she has to do to get it. Nicknamed Horse’s Bum but deserves worse.

Queen Elizabeth and the Royal Family – once you’ve read Maz’s take on the Royals you will never look at them in quite the same way. Like Dahl’s Sophie and the BFG seek support from the Queen, now she’s obviously had some practice and is more prepared to handle the supernatural than ever before.

From the titles which are all punny takes on song titles to accessories such as iGods, literal toilet humour and Ares Sean Connery accent there is plenty to raise a smile for children and adults. And if your kids don’t go around crying Snordlesnot after reading this I’d be very surprised. It’s also beautifully British.

As well as the characters named above there are a whole host of others from Greek mythology and they are highly recognisable with their unique characters and situations slotted perfectly into the plot. From morose emo-rocker Jason to poor Sisyphus battling with his boulder, every character earns their place on the page.

As an adult reading a book series aimed at the 8-12 year old reader there is much to enjoy. The Zodiac council is a commentary on modern politics, and if you are a fan of Marvel’s Avengers the gods have to be the original superheroes.

I expected this series to be funny and it is. There were numerous laugh out loud and big grin moments whilst reading but I wasn’t expecting the emotional rollercoaster I got towards the end of book 3 and I think I spent around one third of book 4 in tears. Maz made one particularly brave decision which I was hoping she would make and then was really emotionally taken aback when she did. This series is full of heart and I urge you to read it to/with kids or alone.

Barry Cunningham on behalf of the publisher Chicken House adds a message to the front of each of their books explaining why they picked the book and what the reader has to look forward to. I think this is a lovely and really unique touch and helps build excitement through the series.

Maz is as humorous and full of energy in real life as her books might indicate. She narrated the audiobooks herself and having heard her talk at a couple of signings I think she will have done a cracking job. Maz is an author keen to undertake school visits and will provide an entertaining and educational opportunity discussing writing craft and generally making the kids smile. I can’t wait to see what she comes up with next.

And that’s my review. In short. I loved them. Read them. Boom! 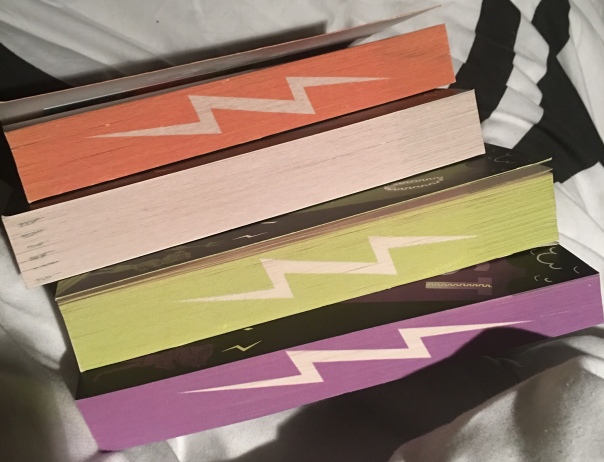 Posted on March 14, 2019, in Book Reviews and tagged Against All Gods, Beyond the Odyssey, Book Review, Chicken House, Greek Mythology, Maz Evans, Who Let the Gods Out? Simply the Quest. Bookmark the permalink. Leave a comment.