Continuing with the spooky theme – today I have a guest post from Sarah Epstein author of psychological thriller Small Spaces. 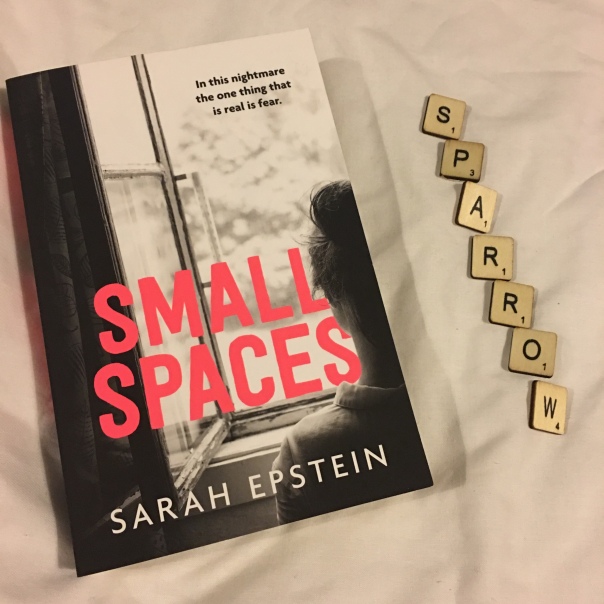 Tash Carmody has been traumatised since childhood, when she witnessed her gruesome imaginary friend Sparrow lure young Mallory Fisher away from a carnival. At the time nobody believed Tash, and she has since come to accept that Sparrow wasn’t real. Now fifteen and mute, Mallory’s never spoken about the week she went missing. As disturbing memories resurface, Tash starts to see Sparrow again. And she realises Mallory is the key to unlocking the truth about a dark secret connecting them. Does Sparrow exist after all? Or is Tash more dangerous to others than she thinks?

Sarah Epstein spent her childhood drawing, daydreaming and cobbling together books at the kitchen table. A writer, illustrator and designer, she grew up in suburban Sydney and now lives in Melbourne with her husband and two sons. She is passionate about YA, especially the thriller genre, which is her favourite to read. Small Spaces is her first novel.

Imaginary friends have always fascinated me. And while I don’t remember having one myself as a child, I’ve encountered plenty of people who did. When my own kids were small and attending playgroup and kindergarten, I’d hear stories from mothers about how they’d overheard their child’s one-sided conversations in the bath, or how their child’s invisible friend had to have a place set at the dinner table. I’d always think, where do these imaginary friends come from? Are they tied to emotional issues, loneliness or just boredom? Are they coping mechanisms, a cry for attention, or even, as some suggest, a spiritual presence that a child’s mind is open enough to see?

It was a subject I wanted to explore in a story. But in many ways I’ve been writing about imaginary friends for years – my own. The characters I create who tell me their story.

In Small Spaces, I wrote about my protagonist Tash’s experiences with her imaginary friend, Sparrow, both as a young child and as a teenager. To do this, I had to understand Tash’s character inside and out – her hopes, dreams, fears and faults – so I could figure out how she would react to the appearance of Sparrow and the situations his presence would put her through.

In a sense, Tash became my imaginary friend, because she was constantly talking in my head. She was with me while I walked my dog, took showers, and late at night when I was trying to switch my brain off to go to sleep. For writers, this is nothing new. Our characters are shadowing us everywhere we go, especially during the drafting stage of a novel when we’re trying to work out exactly who they are. You imagine how they look, speak, think and act, who they are closest to in the world, and what makes them angry or afraid. Soon they become more than just fictional characters – they become friends we are passionate about. They become friends we are rooting for, friends who are keeping us company on our writing journey as well as actively driving our stories.

And, until readers discover these characters, they are friends created in our imagination that no one else can see.

Is this so different from the imaginary friends some of us invented during childhood? If they were created for company, entertainment, comfort or even a bit of attention, perhaps it’s not so different at all. And while I may not set a place for Tash at my dinner table, or hold a conversation with her in the bath, she’s always with me, tucked away inside my head.

Thanks so much to Sarah for this insight into how characters can ‘live and breathe’ for the writer. Hope everyone taking part in NaNoWriMo has picked nice people to spend the next month with