J is for… Journeyman and Joan of Arcadia #AtoZChallenge

J is for… Journeyman and Joan of Arcadia

Hi everyone – sorry for the delay of the J posts – I had a bit of a grump on but now I’ve had some time with my lovely sis and some chocolate I’m ready – going to try and do the K posts too. 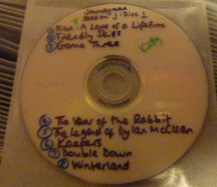 Just the one season of 13 episodes of (in 2007). Kevin McKidd plays Dan Vasser a reporter who travels back in time to ‘right some aspect of wrong’. He jumps back (with only a few minutes warning) and forth to his present life and it shows the affect his extra curricular activity has on his relationships. He isn’t the only time traveller in the mix either. Like many of the shows I seem to like this one was cancelled too soon.

I think the main reason I liked this (other than Kevin McKidd) is that I am interested by Time Travel – so much so that the novels I am working on have time travel featured in them. It also reminded me of Quantum Leap (see my Q post) and Tru Calling (which I’m going to add to my T post).

As you can see I only have my homemade copy but I just found out it is being released on DVD on 29th April – here’s a sponsored link to Amazon. It says there’s a 20 minute feature with the writers etc about what might have happened had it not been cancelled.

Two seasons (2003 – 2005) about a teenager who talks to God. Joan is played by Amber Tamblyn (daughter of Tom Thumb – Russ Tamblyn – loved that film).

The strength of JoA was in its characters – Joan and all of her family and her friends at school seem so real that you just accept that God keeps cropping up (‘dressed’ as a different person each time). Her father is a police chief and her older brother has been paralysed in an accident; life is challenging but God keeps asking her to help other people.

Interesting actually that both of today’s series link to my novel in some way. Ages ago I decided that my protagonist Jane would look like Amber – you can see who else I am picturing on my Pinterest board here. My J post last year was about Jane too.

The episodes that stick out to me when reviewing the summaries on imdb are:
The Boat – Joan of Ark??
St Joan – Joan of Arc
Silence – Joan is ill with Lyme disease – is God just a hallucination?
Queen of the Zombies – Joan tries out for the school play

Joan’s Queen of the Zombies song – yes that’s God boogying along in the wings.

The series also has Joan Osborne’s ‘One of Us’ as the title track. There is something about a title track that settles you in. I like Charmed’s too (but was aware of the song from The Craft soundtrack before I started watching – obviously a ‘witchy’ song).

What do you think of the two shows above?
What time would you travel back to and why?
What form would you like God to take if he/she/they ever popped by to talk to you?
Which TV series title track is your favourite?

I’ve just joined bloglovin to make it easier to follow the blogs I like – it has a tablet app and you should see a widget in the sidebar which will add my blog to your bloglovin feed. Here’s my profile.