My review of Divergent 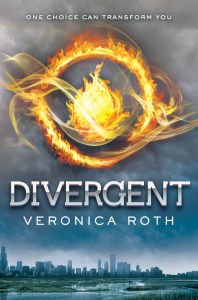 Right I’m not going to give you a run down of the plot – you can get that directly from the lady herself on the link I’ve just given you above (you can even find a link to the first 100 pages on her blog – be warned you will want to buy it immediately so read it only if you have a kindle or other e-reader and can download the rest immediately or if you are near a good bookstore which is open).

My Goodreads review was (deliberately short because I don’t want to give away spoilers):

I loved this book. I was hooked from the sample and whizzed through it on my kindle. An excellent example of world-building. A building romance and tingling chemistry. A strong female lead, too strong at times and not perfect, which is perfect.

Four….what more can I say!
Dystopian and scary because many aspects could be. I’ve seen the comments criticising the violence and there is a good amount but it has a purpose. Negatives: it ended, next please.

Can you pick a faction? I can’t. Guess I’m divergent too (though according to the Facebook challenge I’m Dauntless! – I have Bungy jumped I suppose).

I have selected the quotes below as my favourites and expanded on why below.

“Peter would probably throw a party if I stopped breathing.
”Well,’ he says, ‘I would only go if there was cake.”

Peter is not a particularly likeable character so it would be unlikely for Tris’ little gang to attend any sort of party he would throw, except, of course, as Veronica truthfully shows us here, the power of cake can be overwhelming, ;o)
“We believe in ordinary acts of bravery, in the courage that drives one person to stand up for another.”

Oh for a world that actually believed in this. There are so many things that seem to stop us doing this but it really is so important.
“A brave man acknowledges the strength of others.”

I love this sentiment that recognises that it is OK to back down from a ‘fight’ graciously.There is something akin to being ‘the better man’ here.
“For a few minutes we kiss, deep in the chasm, with the roar of water all around us. And we rise, hand in hand, I realize that if we had both chosen differently, we might have ended up doing the same thing, in a safer place, in gray clothes instead of black ones.”

If you’ve not read the book you probably won’t quite get this quote but I think this is a beautiful and concrete way to describe the fact that they are soulmates (perfect show not tell here Miss VR).
“Sometimes crying or laughing are the only options left, and laughing feels better right now.”

As a pretty good cryer I do feel sometimes a good blub is necessary but there really is nothing better than a good rib aching belly laugh. This also acknowledges that when times are tough we sometimes laugh when society tells us we should be sad and crying (think very close to the bone, too soon jokes about disasters etc). But this is a coping mechanism otherwise we may just fall into a big chasm of despair.
“Why do people want to pretend that death is sleep? It isn’t. It isn’t.”

Death is one of my personal big phobias and this just resonated with me (and I probably cried whilst reading this). There is death in this book and it is brutal but then death often is.
I have already read this twice and bought and part listened to the audiobook. I think I need to treat myself to another read soon.
On to Insurgent
Now I can’t wait – and I mean this; I am so excited to read the second book in the Trilogy – Insurgent. Especially as a summary synopsis has just appeared linked to on Twitter whilst I have been writing this post – read it here.
I love that it talks about embracing Divergence – this is most certainly a clear parallel with the idea that we should embrace differences to truly move forward. We don’t have to agree on everything – I can see respect coming through as a theme in the next book.
I honestly don’t know if I can wait until May so I may cross my fingers, turn around three times on the spot, blow an eyelash and pray that I get an ARC before then.

Isn’t this cover scrumptious. Again click here for Veronica’s blog post where this pic originated.
On the Facebook page there was a post where people were guessing what the final book in the trilogy would be called. My friend (the new Mrs Woods over here who incidentally was the one who introduced me to Divergent) joked that it would be called Detergent (there’s a funny tumblr post here that parodies this on a mock up cover). I tweeted this to Miss Roth who replied that this was the joke name that her and her agent etc were calling it. Thankfully because Mrs Woods was none too impressed that I’d posted that (sorry Stacey).
My money is on Convergent (not had any comments back on that one) as it fits the Gent theme and would symbolise a coming back together. Now this time I’m sure Stacey won’t mind that together (mostly her) we reckoned that the tagline might be One Choice might Save you. What do you think?
Please share your comments about Divergent with me, I love talking about the book (it’s my new Harry Potter – though I will never say goodbye to ‘him’).
Look forward to the Divergent film Trilogy too.