The Whispers of Wilderwood Hall by Karen McCombie – Blog Tour 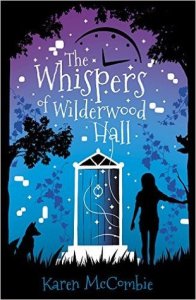 Ellis is losing track of time…

After leaving her friends to move to a crumbling Scottish mansion, Ellis is overcome by anxiety and loneliness. Then she hears whispers in the walls…and finds herself whisked back in time to 1912.

At first, she feels like she’s finally home. But the past may not be as perfect as it seems – and is there more to hope for in the present than she first thought?

Karen McCombie is from Aberdeen but now lives in North London with her husband, daughter and one big ginger cat.

Before Karen became a full-time writer she worked for several teen magazines such as Just Seventeen, Bliss and Sugar in a variety roles – everything from Fashion Editor to Features Editor – all very exciting and glam!

Karen has sold over one million books in the UK alone and has been translated into 15 languages.

Find out more at http://www.karenmccombie.co.uk and take the opportunity to join Karen’s Club!

This was a quick and easy read and at its heart a touching story – it reminds me of something I wrote when younger which I think was probably inspired by watching Moondial. I wonder if all children being dragged round old houses imagine flitting back to the past and meeting the inhabitants of a past time?

Well for Ellis this really happens.

I like the extended metaphor that the jumps back in time are for Ellis in terms of her feeling out of place and unwanted. Her mother has just remarried and she has a new stepdad and stepsister – and all this has happened in the last few months. In 1912 she befriends Flora, a housemaid who is bullied by those around her, the two of them become each other’s shoulder and Ellis starts to explore how she had been treated by ‘so-called friends’ in the past.

Ellis transforms as the book progresses and begins to assert herself and challenge the secrets that are being kept from her. Her experience of anxiety and other people’s reactions to it were handled well – the whirlwind romance experienced by the adults is for Ellis a ‘Whirl, tilt, shift’. I would add this book to a list of those that deals with mental health in a sensitive way – but as part of a wider story and not the sole focus.

Now, I put the 1912 date together with another little clue before Ellis did but that was part of the fun – when was she going to twig? There was a twist though that I wasn’t expecting. Very clever McCombie!!

I received my review copy from Scholastic via Faye Rogers – opinions as ever are my own.

Please find details of the rest of the stops on the blog tour here:

Posted in Book Reviews, Kirsty rambles on about life, the universe, tv, and everything!

Q is for… Quantum Leap #AtoZChallenge

Q is for… Quantum Leap

Today’s show isn’t quite as old as the Incredible Hulk but I probably saw it around the same time. Quantum Leap  had five seasons from 1989 − 1993.

Sam Beckett, a scientist leaps back in time – each episode sees him leap into another person’s body and have to do something to solve an issue in their lives before he can leap on. We only see who he is when he looks in the mirror – usually Sam is dressed as them which is funny when they are a lady. He always hopes that his next leap will be the one home. He does have help each week in the form of Al – his holographic colleague and Al’s computer Ziggy who can find out more about where they are and who Sam is. The banter between Scott Bakula and Dean Stockwell was one of the best parts of this show.

Each episode was often like a mini movie – looking at serious issues, race relations, disability (blindness and learning disability), rape, alcoholism and so on.

There is an episode where he leaps into his younger self and tries to change things that he shouldn’t, another where he becomes someone just about to be executed, another where he is a chimp!. Also where a course of ECT makes him act like other people he’s leapt into. I’m not sure if I remember all of these – I sense another box set addition to my wish list.

Here is the Episode intro and music.

Do you remember QL?
What other TV duos do you like?

T is for… (#atozchallenge)

Love this picture (click on it for source link) and it kind of represents the way I want to represent time travel in my book.

My NaNoWriMo novel is about an academy for Time Police or Time Cops.

This inevitably brings with it Time Travel.

Now the idea of time travel blows my mind and I go round and round in circles trying to work out how what happens when you travel back to the past or to the future might affect the present. Sometimes I just give up because I think my brain might explode.

My main time travel influences are:

Harry Potter and the Prisoner of Azkaban

I’m pretty sure I saw Time Cop with JCVD

Now this is going to be my book so I will make up my own lore about time travel but I’d like to know what the generally accepted rules are please, so to aid my research please direct me to any good resources, films, books etc.

What rules do you expect to see followed in time travel stories?

What annoys you/would annoy you in time travel stories?

Thanks for your help in the past, present and future.

Posted in #am writing (and all things writing related), April A-Z Challenge, Kirsty rambles on about life, the universe, tv, and everything!, Training Time (WIP)