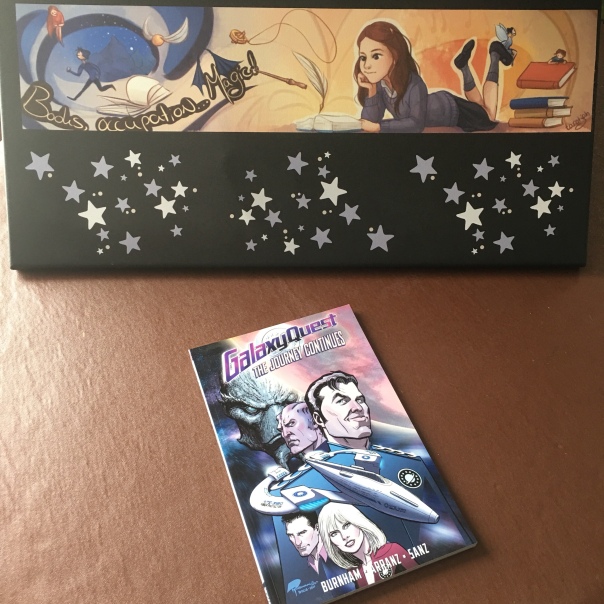 Once upon a time, a troop of has-been actors that starred on an old sci-fi show Galaxy Quest, were enlisted by an alien race to save them from an intergalactic tyrant. Despite being way out of their depth, the cast somehow manage to save the aliens and have enjoyed a career resurgence sic de returning from their unlikely adventure. But all that is about to be interrupted by Qint, an alien with a very surprising ax to grind against Jason Nesmith and the crew of the NSEA Protector!

Galaxy Quest is one of the funniest films ever and I was so excited to spot this in the comic store.

The artwork is good, internally the characters don’t quite look like they do in the films but that didn’t bother me too much. There was a little role call of their images (with their backstory) at the beginning. The front cover artwork is nearer to the film actors but is by a different illustrator. 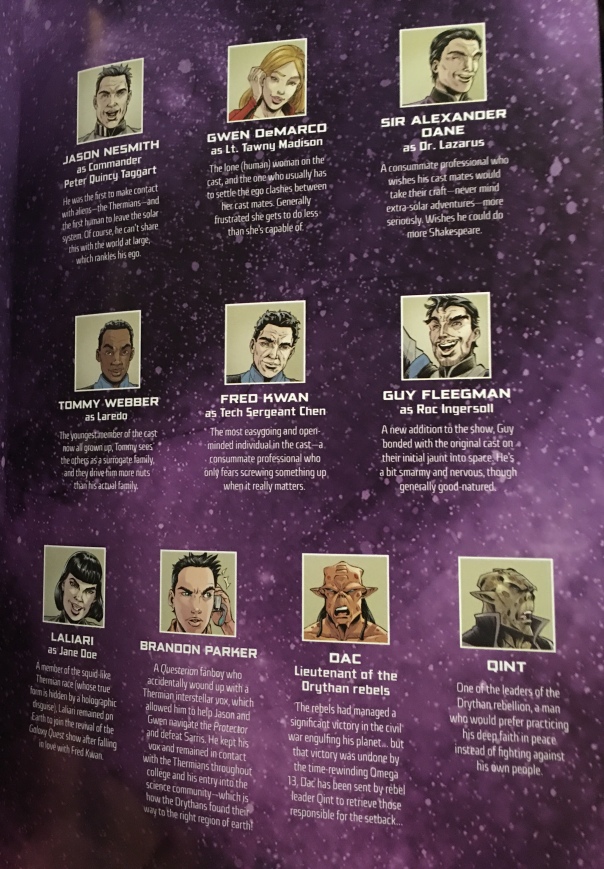 The story ties in with the film. By using the Omega 13 and rolling back time the crew caused a problem for another alien race who are now out for revenge.

The plot is really that simple. There’s some fighting. Some use of original GQ scripts in the process of trying to avert disaster. I felt it all got resolved a little quickly and easily (this bind up is of 4 issues). There was also not enough Laliari.

I found that the comedy fell flat without the actor’s delivery. Then film really had the perfect cast.

For me this was a one read story… although the cliffhanger story it left on sounds like it could be fun.

With London Pride being yesterday I thought that time was right to finally review this Graphic Memoir by Maggie Thrash.

Maggie is fifteen and has basically spent every summer of her life at one-hundred-year-old Camp Bellflower for Girls, where her days are full of a pleasant, peaceful sort of nothing. Until one confounding moment of innocent physical contact catapults her into gut-twisting love with Erin, an older, wiser, and surprisingly – at least to Maggie – female counselor. When it seems as if Erin might feel the same way about Maggie, it’s too much for either Maggie or Camp Bellflower to endure, let alone understand.

Maggie Thrash is a staff writer for Rookie, a popular online magazine for teenage girls. This is her first book. She lives in Delaware.

Honor Girl was first published in 2015 and was a Los Angeles Times Book Prize Finalist.

This is a non-fiction book, based on true events and is presented as a graphic novel. It is about a girl discovering her sexual attraction to another, older girl at summer camp.

I thought it was excellently done and a great use of the genre. The book is illustrated in watercolour pencil and pen images which were finished digitally and even the font was designed by Maggie. The art is fairly simplistic but there’s something powerful in its simplicity especially in the close up images like below.

I’ve seen some criticism of the ‘ending’ but I really liked the fact that is was realistic. Nothing against fictional coming out stories but the happily ever after they often portray does not often represent the stories of many teens in this situation. I also thought Maggie’s confliction was represented powerfully.

I read some of the one star reviews of this book on goodreads and whilst I agree with some of the concerns highlighted over this being about a relationship between an older 19 year old camp counselor and a 15 year old girl I can’t help but wonder how vehemently those concerns would be expressed if the counselor had been male and the 15 year old female. In fact I’ve seen many older boy/younger girl stories like this fictionally and in real life that are seen as ‘part of the norm’.

This is set in a summer camp in southern America a ‘few’ years ago so usual camp activities take place including shooting guns and the safety around such activities is more lax than I think it would be now. This was again a criticism I read from others, though I think we need to take care to read stories in their context not just applying today’s standards.

I liked the use of humour and ‘silliness’ when describing the typical teen girl behaviour such as lusting over the backstreet boys, being mean to each other and scaring the younger girls. As such I do think that teenagers will relate to the story whatever their sexual orientation. It’s about growing up, discovering yourself, falling in love and heartbreak. What is more universal?

I received a free copy of this book from the publisher Walker for the purposes of an honest review. I read it a year ago so apologies for the delay in reviewing.

…Preceded by Chaos is a graphic illustrated series, charting the dramatic past, present and future of a young emergency room doctor, as the stress of saving lives threatens to overwhelm him. Mitchell Weaver is a troubled young Emergency Medicine doctor, orbiting a world of high-stress, intense pressure. It’s a distinguished profession with the burden of a variety of particularly disturbing personal demons that he must battle in order to maintain the façade of sanity and control. The third instalment of the series, Volume -1, takes place before the first book in the series, Volume 0, before Mitchell’s attempt at sobriety and self-awareness. During this chapter Mitchell travels to Spain in an attempt to find a part of himself that his been lost. But ultimately, Mitchell’s trip to Barcelona may be an escape more than journey.

M. Wheeler has held an eclectic array of jobs – including working as a studio engineer and a teacher — before he entered medical school in his thirties. During his residency in New York City, he wrote the first three books which would eventually become the …Preceded by Chaos series. Wheeler travels extensively for his job but currently calls Miami, Florida, home.

I started this book thinking it was going to be a graphic novel. But as it says above it’s a graphic illustrated series so there are some illustrations but also lots of pages of text only. This is actually the third book in the series but is a prequel (I haven’t read the others).

I was drawn to the story of an emergency medicine doctor battling his demons and the cover illustration really demonstrates that concept. The sections that take place within the hospital were the ones I most enjoyed and it was during those that you felt the pressure on Mitchell. There are some quite verbally (and illustratingly) graphic depictions of drug use. The scene with the case of a young boy is realistic and upsetting and the language used definitely reflects the author’s experience as a medic.

I am assuming that the series title is based on the following quote: “All great changes are preceded by chaos” by Deepak Chopra,

and the summary for the next books describes how Mitchell aims to change and battle the addiction and demons that are affecting his life. He is left with a summons that means change is inevitable and this seems to link to an enigmatic case that is alluded to but not discussed in this volume.

The preceding chaos is definitely evident here and I have to admit to being a little confused about what was happening. The majority of the story takes place in Barcelona where he goes on holiday with a mate from work and lots of alcohol is consumed. The foreword is by a fictionalised character from the story who I’m not entirely sure actually exists or if we have a Jekyll and Hyde situation going on. The red eyed bull demon again could be a metaphorical representation of turmoil or a real inner demon.

Unfortunately I wasn’t drawn to Mitchell as a character and I didn’t feel women in the story were treated all that well. There was was a scene that featured a prostitute and a very unusual shopping list that I think I’d prefer to forget – so I’m not convinced I would read on to find out what happens but hopefully the character manages to turn his life around. Despite his irresponsible actions there is clear evidence that he cares for the patients and has become burdened by past events. I think the concept of mental health could be considered more explicitly. I think in this case it was more that my expectations of the story didn’t match what I got.

I believe the print copy I received was the final version and there were a few errors still present, and some of the text on the illustrations was blurred and difficult to read. I wonder if the kindle option makes this easier with the ability to zoom in.

The illustrations were all grayscale except for a couple that included a dash of red. Oddly one chapter was entirely presented in captioned illustration and I do think that the material would lend itself to being presented in this way as a graphic novel.

Do check out the other stops on the tour to see what everyone else thought. 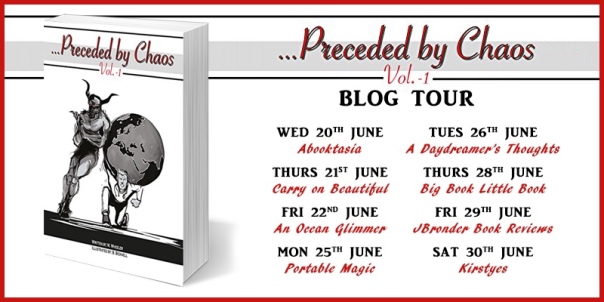 I received my copy from Faye Rogers and the publishers for the purposes of honest review.