My Goodreads Review of Don Juan in Hankey, PA by Gale Martin

You can see this review on Goodreads here.

First off the bat I’d like to give a couple of provisos to this review. I was using a review copy so I’m not sure what changes if any there have been to the final proof. Also I’m not sure this is my normal genre of choice which has mainly currently been Young Adult dystopian or fantasy.
That said I really enjoyed Gale Martin’s debut novel and here are the reasons why.
Gale is an excellent graduate of the show not tell school of writing.
She uses a switching point of view masterfully without making the reader dizzy.
Her characters are all unique and three dimensional and you care about the success of their venture. (I had the pleasure of interviewing Gale and her main character Deanna on my blog. When I started reading the book Deanna didn’t jump out as the only character of interest with the others used as plot devices and this is a huge credit to the story).
Gale’s personal love of opera creeps into the novel in the setting and plot but this is secondary to the story of the people in the opera world so you don’t have to know anything about opera to enjoy it (I certainly don’t).
There are some fantastic moments of comedy, usually involving ghosts. I adored the seance scene.
So after all of that praise why only 4 and not 5 stars.
As I said as a proviso this is not my usual genre. If anything it’s too happy and farcical (but it doesn’t profess to be a serious book).
When interviewing Gale I asked her about the short summaries at the start of each chapter. I had guessed correctly that these were an operatic device (from the written libretto) and therefore a nod to opera. For some reason this was a real sticking point for me reading this as a piece of fiction. I felt they took me out of the story and told me what was happening. As I said earlier Gale is a master at showing and I think where additional information was given in these summaries they would have been more effective in the main narrative. This is a completely personal preference and I’ve seen a number of reviews that liked this aspect.
I also wanted one character to get a starring part on opening night – but this is just me being selfish and I enjoyed the actual scene.
All in all I would be happy to read it again and I think it would be great translated into film. It’s also got me intrigued enough to try and see an opera in 2012. I look forward to reading more from Gale.

Opera with Ghosts – An interview with Gale Martin

I’d like to welcome Gale Martin as part of her blog tour for her debut novel Don Juan in Hankey, PA. She’s also bought along Deanna Lundquist, the Hankey Guild Chair. 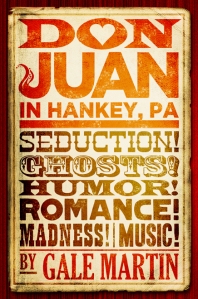 My favourite question to start – Why are you a writer?

For no logical reason, Kirsty. Nearly seven years ago, approaching midlife, I had a life-altering experience, and felt the sudden urge to write all about it. After I told that story—my first book (not a very good one), I simply kept writing. When the stories in my head didn’t match the stories and scenes on paper, I realized, not having any formal training in creative writing at that point, that writing required more than sincerity of emotion. So I kept at it, trying to improve my craft.

The novel is based around the members of a small town opera guild – how much is based on real people you’ve come across when you’ve been pursuing your love of opera?

Most of the people in the book are composites. These characters include shards of real-life folks pre-dating my rather recent interest in opera. People who intrigue me or infuriate me stay with me the most. I was at a writing conference and a middle aged woman was having a rainbow assortment of pills for breakfast while I was having oatmeal and OJ. That stayed with me, so that’s why it’s in the book.

Being an opera virgin myself are the bits at the start of each chapter opera related? I have to admit to not enjoying these as much as they felt too ‘telly’ and took me out of the story which I loved, and you are fantastic at showing through the eyes and actions of your characters.

Those scene sets were my homage to a libretto of Don Giovanni  I found published in the 1800s and also to other libretti I researched prior to writing the book. Sometimes the libretti had these wonderfully florid scene sets like, “The sun, a ball of fire, has just risen over the rolling hills of Tuscany, casting an ethereal glow upon them.” I began to look forward to each new scene set as I poured through various libretti. So they appear in my book because the work was inspired by an opera, and I felt I owed that vestige to the form.  I also had a cast list in the original manuscript also inspired by that libretto. The cast list didn’t make it into the book, but I have included it on my website also in homage to these colorful libretti of old (far pre-dating the supertitles we use now) and because I had a blast preparing it.

I’ve seen people comment that they liked this aspect so I suspect it’s just my lack of taste but I’m pretty impressed that I made the link to opera (Kirsty).

How did you decide on POV?

POV was a sticky wicket. Originally, I started out using a narrative we to convey the essence of how a guild behaves and operates. Ultimately, I settled on using multiple POVs to best advance the storytelling. I hadn’t planned to use so many. But early on, I realized I couldn’t tell the whole story from Deanna’s POV. I had to let the reader get into the Argentine baritone’s head or doggie paddle through Jeannie Jacobs’ obsessive thoughts– the spurned lover with the stuck crazy button (the Elivira character from the opera.) Deanna is primary, Richard is secondary, and others just worked there way into the scene.

I loved the séance scene. Which scene/s did you have most fun writing?

I had a great deal of fun writing that one.  One of my  undergraduate English teachers claimed to be a medium and a friend and I tried to summon all the dead people we knew around her kitchen table. I also loved Vivian’s last scene with her mother, Leandro’s NY gala episode with Jeannie, and the opening night scene near the end, when all the gothic elements possible in an opera like Don Giovanni fully flower onstage due to forces beyond the guild’s and the director’s control.

What do you plan to spend your first royalty cheque on?

I’m torn between a really good facial and tropical fish.

What about a fish pedicure? (Kirsty)

And a quick fire round. Five words or less.

When do you write? Very early morning before work

Where do you write?  Mostly on sofa from laptop.

Do you have a writing outfit? Sweatpants and sneakers usually.

Pen or pencil?  Keyboard most often.

Favourite hobby other than writing or Opera?

Deanna, as I’m only on chapter 26 I’m aware you still have a lot of preparation for the opera so thanks for taking the time to come and speak to me.

I’m wondering why you were so reluctant to report your attack to the police?

It’s just that we really needed to hire a general director—the opera would open in matter of weeks. I really wasn’t hurt after all. Just my pride. I didn’t want anything to take away from getting that general director installed. Our very survival depended on it!

You make a great suggestion that the puppyhunt website would be very usefully translated into a dating website where women could pick out their men in the same way. What three pieces of information would be vital for you to know about before selecting a suitor?

1)     Temperament   2) Faithful quotient (ability to be faithful) 3) Whether they make good rumaki.

How do you really let your hair down?

For me, it’s all about spa visits. Love to go to Font-o-Beauty and get a facial, a spa pedicure, or get wrapped in plastic—one session can take off a dozen inches.

(Kirsty rushes off to book one session a day for a week – can I lose metres?)

I’m interested to know which of the women in the guild you are closest to and why?

I tend to be a guarded person. Relationships can interfere with my needing to get things done. I tolerate Vivian and Oriane. But I get tired of both of them after any length of time.

And a quick fire round. Five words or less.

Why? His piebald coloring.

How do you deal with a ghost? Same way as people– confront!

Huge thanks to Gale (for the ready formatting too ;o) ) and Deanna – good luck with everything. I am looking forward to finishing the last few chapters and posting my review on Goodreads/Amazon/here. Maybe I need to add ‘Attend an Opera (Madame Butterfly maybe)’ to my to do list for 2012.

Please leave Gale, Deanna and myself your comments below.