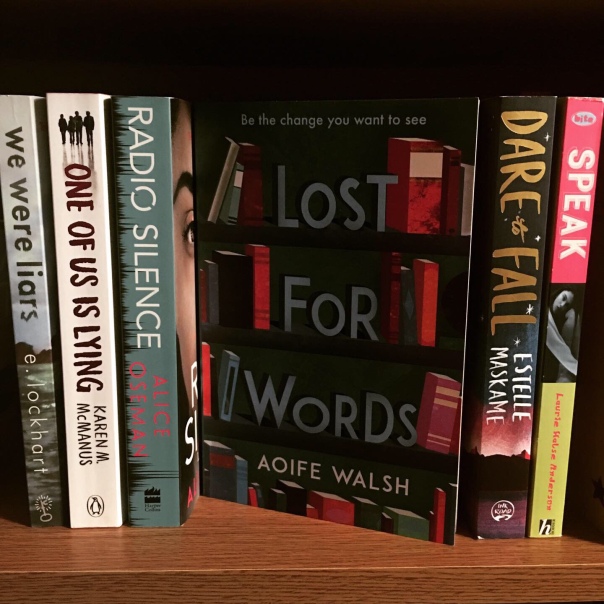 It’s my spot on the Lost for Words #bookstagram tour organised by @darkroomtours today and I thought I’d share my review here too.

Dallas’s life was turned upside down the day her mum was killed in a traffic accident. Now she lives with her brothers, step-sister and her mum’s partner Gemma in a too-small house filled with bickering and grief. As the end of primary school approaches, Dallas learns that the local library has run out of funding and will soon be closing. Dallas decides she cannot let another thing she loves be lost. Together with her friends Aiza and Ruby, and her freewheeling American aunt Jessi, she starts a campaign to save the library for everyone.

A beautifully told tale about family, grief and growing up. 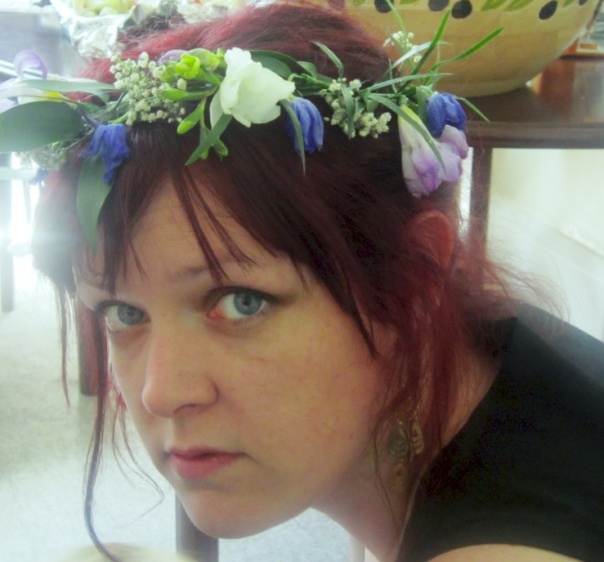 Aoife Walsh lives in Oxford with three nice children, a nice fellow and a sweet cat. Her previous books are Look After Me and Too Close To Home. Like Lost For Words they are about families, but then in her opinion hardly any families are the same, whatever Tolstoy reckons.

Although eleven year old Dallas takes on the council in her attempt to save the local library this is really a story about family. And Dallas’ family has been rocked by tragedy.

This story is told from Dallas’ point of view and through her we explore grief, challenging family dynamics, friendship and a dabbling in politics. From her very first school debate on Brexit 😂, to her clashes with the council, Dallas grows in confidence – but will it be enough?

This is a middle grade story but with Dallas on the verge of leaving primary school and moving up to secondary school. With the arrival of her aunt Jessi from Texas she is offered an even bigger move, and when you feel like the spare tyre in your family, feeling wanted is very comforting.

After her mum’s death, partner Gemma is left in charge and she’s got a job, two 4 year olds (one with autism), an 18 year old and Dallas to contend with, all within the confines of a small house on the river. The sense of lack of space is expressed well and I love how Dallas uses this to express why libraries are so important, even though she hasn’t used hers for months.

The dynamic between Dallas and her two best friends, Ruby and Aiza is an escape for her. They have a few adventures, challenging bullies, walking the line between becoming bullies themselves, a trip to London gone wrong. I particularly liked the scenes where Ruby asks Aiza more about her Muslim Faith after hearing negative comments at home. I love that the girls are able to have this dialogue. I would definitely be interested in reading stories from each of their perspectives too. Ruby in particular is so quiet, whilst I’m sure she has lots to say. Neither of these girls has the most stable home life but they look after each other, and also have the ability to be honest with each other too. This is a great example of female friendship.

I highly recommend this read, it’s empowering for kids to be shown how to stand up for something and Aoife Walsh has written a dynamic and imperfect family or three. I really hope to read more about these girls.

Thanks to Darkroom Tours and Anderson Press for gifting me the copy of this book for the purposes of an honest review.

Do check out the rest of the tour stops 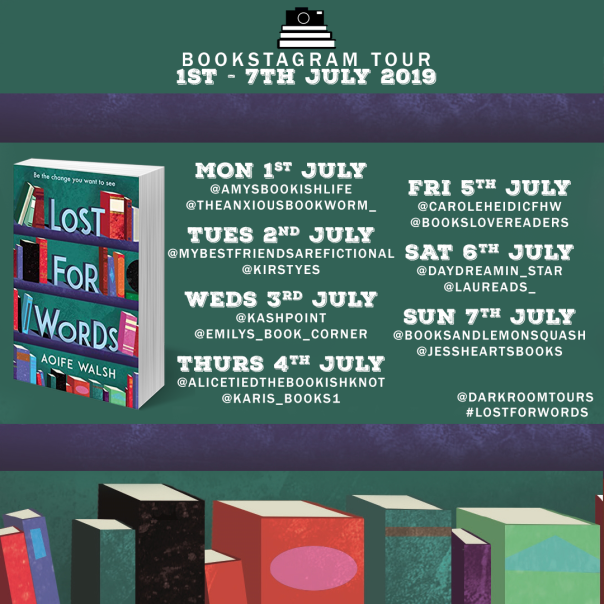 The Weight of a Thousand Feathers by Brian Conaghan – Book Review 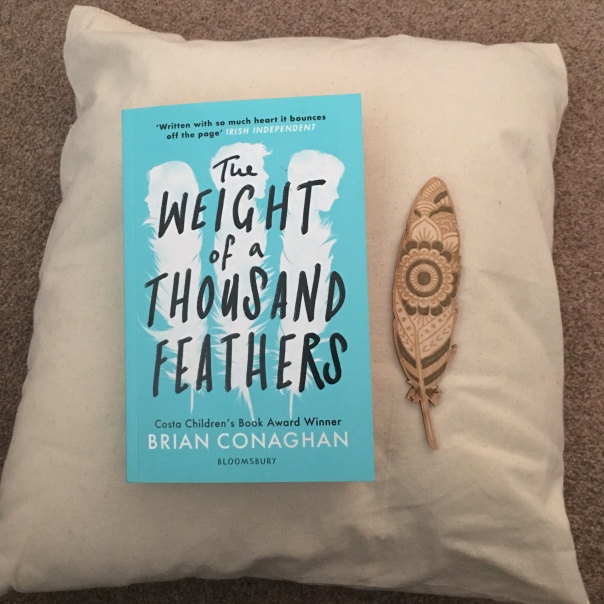 What’s another word for ‘thesaurus’? How can I tell Bel I want her as my girl friend, not my girlfriend? How much pain is mum in today? Has she taken her pills? And sometimes, secretly, Why us?

Will Bobby let him have Rice Krispies for dinner? Can he stay up late on the computer! And why won’t Mum’s stupid illness just GO AWAY?

But it’s Mum’s question for Bobby that could turn everything on its head.

It’s the Big One. The Unthinkable One. If Bobby agreed, he won’t just be soothing her pain. He’ll be helping to end it.

Brian Conaghan was born and raised in the Scottish town of Coatbridge but now lives in Dublin. He has a Master if Letters in Creative Writing from the University of Glasgow. For many years Brian worked as a teacher and taught in Scotland, Italy and Ireland. His first YA novel for Bloomsbury, When Mr Dog Bites, was shortlisted for the 2015 Carnegie Medal, and his second, The Bombs That Bought Us Together, won the 2016 Costa Children’s Book Award. We Come Apart, a verse novel co-authored with Carnegie Medal winner Sarah Crossan, won the 2018 UKLA Book Award, and his fourth novel, The Weight of a Thousand Feathers, won the 2018 Irish Book Award for Teen & Young Adult Book of the Year. Now Available in paperback.

This is a fairly difficult review to write because I have quite conflicted thoughts about this book. It looks at a very controversial topic – assisted suicide/euthanasia – so it was always going to be an emotive read.

Bobby’s mum has Multiple Sclerosis (MS). This is a condition I am familiar with through my work and so this is perhaps where some of the difficulty I had with the book comes from. It’s like when my dad used to complain about London’s Burning because that wasn’t what real firefighting was like.

It’s not completely inaccurate of course, and everyone experiences MS in different ways, but this seemed like a overly sudden progression.

I really enjoyed the first half of the book. Bobby is 17 and classed as a young carer. His younger brother Danny also has undisclosed special needs so he looks after him too. Bobby’s teacher introduces him to a support group with other young people in the same situation. Much of this part of the book is about the connection he makes with the other people there. It reminds me a little of the group scenes in The Fault in Our Stars for that reason. There is some romance too. It was positive to see LGBT rep that wasn’t the main focus of the story too.

His mum asks a couple of big questions so don’t be fooled when the first isn’t the one indicated in the synopsis. My wish would have been a greater exploration about possible reasons for the first question.

School seems to drop off the radar for Bobby although it is his life outside that is the focus of this book.

My biggest difficulty I think is with how the euthanasia topic is handled and there are some quite shocking discussions and scenes around this. It definitely shows the need for a fuller discussion around this societally because there is a definite acknowledgement that young people should not have to be put in this situation.

And the ending was very abrupt. I don’t know if there are plans for a second book.

I did feel empathy towards Bobby and the scenes with his younger brother Danny were good. I liked their connection.

Personally I think I’m just maybe too close to this particular topic to read it completely as fiction.

Thanks to Ian and Bloomsbury for the gifted copy for the purposes of honest review.