Digging Up Bone,Digging Up Secrets – Guest Post by Nicola Ford for The Hidden Bones Blog Tour

I’m delighted to be hosting a guest post by author of the The Hidden Bones Nicola Ford. Nicola is a real life archaeologist and has used the adage “Write what you know” to share a thrilling mystery with us. I’m just over half way through (and needing to know what happens!!!) and will share my thoughts soon. But for today let’s hear from Nicola.

The dead can tell fascinating tales if you know how to listen. It’s a truth at the heart of many modern murder investigations. And it’s also central to the way Clare Hills, David Barbrook and their team of archaeologists in the Hidden Bones go about their work.

Twenty first century forensic science draws heavily on the techniques employed by today’s archaeologists. So important is it to police investigations that over the past two decades forensic archaeology has become a discipline in its own right. A discipline that has not only introduced archaeologists into police inquiries, but to the investigation of war crimes, and the aftermath of major disasters. And those techniques have revolutionised what we can learn about the lives of individuals who lived and died, in some cases, many centuries ago.

In the Hidden Bones the ability of Californian osteo-archaeologist Dr Jo Granksi to read the remains of the dead reveals secrets both ancient and modern. The scientific techniques that she applies are approaches that I rely on in my day job as the National Trust Archaeologist for the Stonehenge and Avebury World Heritage Site. As an archaeologist I’ve sometimes been called upon to investigate the scenes of ancient killings. And it’s that experience that I draw upon in my crime writing.

I worked on a Bronze Age enclosure site at Velim in the Czech Republic that contained the remains of over a hundred people who’d died over three thousand years ago. Some were adults – men and women – but the vast majority were children. Skulls and parts of skeletons had been strewn across the site, and thrown into ditches. Whether we’re archaeologists working on the skeleton of a child killed millennia ago or forensic archaeologists working as part of a scene of crime team we want to answer the same questions. Who were they? How did they live? How did they die, and why?

When Velim was first discovered there was a raft of theories about what had happened here. Had the site been attacked? Were these the victims of warfare? Some of the remains were disarticulated. Could they have been victims of cannibalism?

That’s where meticulous excavation and the work of the osteo-archaeologists applying the same approaches as Jo Granski come in. Many of the people who died at Velim had been subjected to severe head trauma which was visible on the crania. But there were repeated patterns in the fracturing of the limb bones too. And the wear and disarticulation on some of the bones, taken with a host of other evidence gathered by the bone specialists suggests that the children that I excavated, and their companions, were the victims of ritualised sacrifice.

The past worlds I unearth as an archaeologist can sometimes prove to have been dark and dangerous places. But the present too has its shadowy secrets. And it’s some of those secrets that I dig deep to reveal in the Hidden Bones. 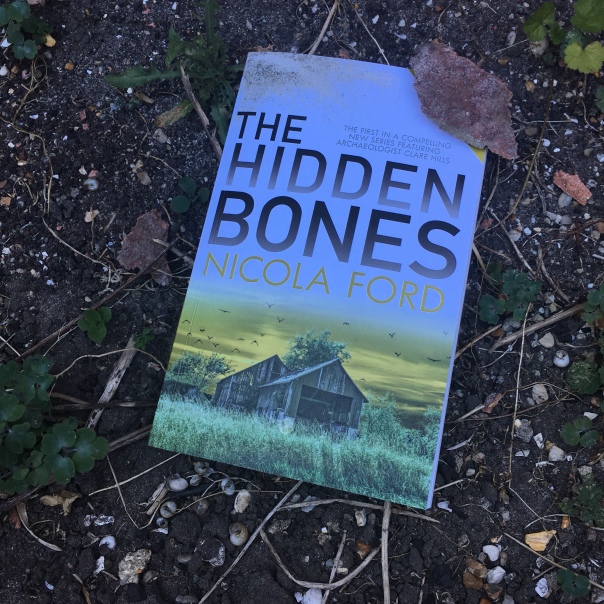 Following the recent death of her husband, Clare Hills is listless and unsure of her place in the world. When her former university friend Dr David Barbrook asks her to help him sift through the effects of deceased archaeologist Gerald Hart, she sees this as a useful distraction from her grief. During her search, Clare stumbles across the unpublished journals detailing Gerald’s most glittering dig. Hidden from view for decades and supposedly destroyed in an arson attack, she cannot believe her luck. Finding the Hungerbourne Barrows archive is every archaeologist’s dream. Determined to document Gerald’s career-defining find for the public, Clare and David delve into his meticulously kept records of the excavation.

But the dream suddenly becomes a nightmare as the pair unearth a disturbing discovery, putting them at the centre of a murder inquiry and in the path of a dangerous killer determined to bury the truth for ever.

Huge thanks to Nicola and to Ailsa from Allison & Busby for my review copy. Do check out the other posts on the tour and come back soon for my review.