Terry Pratchett is the name of a man, nay a wizard, who wrote books.

I have come to his books later than most, mainly because I knew that once there I’d get hooked in. Like the post in the story I’ve arrived… Better late than never.

I’m therefore perhaps more familiar with Terry’s tireless campaign for death with dignity, after his diagnosis with Alzheimer’s than his books, so when Serendipity Viv suggested hosting a blog tour to commemorate his life and writing I jumped at the chance to finally get stuck in.

Going Postal seems to be the book that was written for me to read at this time; after two Sundays spent with dogs barking as I posted leaflets through doors, a character called Stanley and even a comic mention of Occupational Therapy in Chapter One. 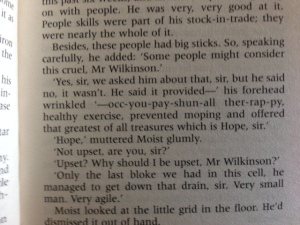 Moist vin Lipwig is a con man, who gets caught and faces the gallows… but if he puts his belief in angels he gets a second chance. His is tasked with taking over the ailing postal service of Ankh-Morpork, which is suffering after the introduction of the Clacks Towers run by Reacher Gilt – eye patched and even shadier than Moist. This culminates in a competition to deliver a message between the Clacks and a coach and horses but can Moist perform a miracle… after all everyone believes he has the gods on his side.

It’s easy to see why the character of Moist made it onto Jim Den’s top ten characters list – he is exceptionally witty and clever, and, although he doesn’t seem to recognise it himself, does have a heart that is only shifted just to the right of where it should be.

The post office is filled with a whole host of special supporting characters – Stanley the pin collector who gets very excited at the introduction of stamps… and occasionally very very angry! Mr Groat, an ageing Junior Postman, and Mr Pump – a clay Golem and Moist’s parole officer.

I think my face had a permanent smile whilst reading this book, and now I want to watch the Sky production again. 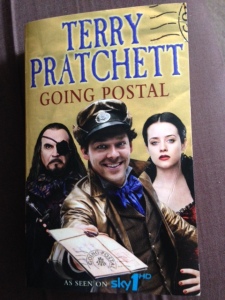 Enjoyable character names, witty banter, the usual made unique and just a little bit batty, and some sly social commentary tucked into an entertaining story. I loved it…and I’ve got just a few more to catch up on.

But now Terry Pratchett, the man, has been welcomed by Death, one of his most beloved characters , and they are having a jolly good catch up. But he has left us his words… and as he writes in Going Postal, ‘Words have power’ and his books, like the library are a ‘gevaisa, a tomb of living words.’

Please check out the blog tour’s opening post where people shared their thoughts about Terry and follow the hashtag on twitter to find the other posts. But, if like me you hadn’t delved into Discworld please pick up a book – I’d say Going Postal isn’t a bad place to start.